Thinking about how to begin this month's post I realised that Beatrix and I have a few different things in common – a rather snappy dress sense, a thing for the sheeps (I am Welsh after all.. or at least that's my excuse) and we both have a bit of a thing for adventuring around and exploring new places.

Beatrix may never have ventured out of the United Kingdom but she sure got around, exploring a lot of different places within the country, something I love doing.
There are all kinds of journeys – long ones which require a multitude of snacks, small, little ones that zip past and those you remember for a variety of reasons.

If you have peeked at the Hill Top and Beatrix Potter Gallery's Facebook page over the last few weeks you will have seen that Michael Portillo brought his railway journey up to the lakes to see B and the team at Hill Top.

He was here to find out more about Beatrix, her friendship with Hardwicke Rawnsley and the part she played in the formation of the National Trust. I was lucky enough to be able to see some of the filming at Hill Top. I didn't quite get my on screen debut just yet but watching it happen was interesting so keep your peepers peeled for it on the tele in the near future!

Micheal P may favour the railways for his journeys but this isn't the only way to travel check out this amazing ship that we have at Hill Top.

To say that I don't know much about ships is a huge understatement and my experience with them is pretty limited – unless rowing a small wooden boat on Durham River counts? With these long arms I'm practically made for rowing..
So to find out more about this vessel I've done what all good detectives would do... I googled!

This is a three masted ship and apparently made by a sailor between 1870 and 1900-ish. From my research (aka scrutinizing lots of images of ships) I'm going to make an educated guess and say that this is a type of schooner? These are sailing vessels with two or more masts often designed for trades that required speed and windward ability.. trades like, pirating, “Ohh Arrrg!”
With all those sails I imagine that it would have had no problem zipping through the waves or lakes!

A slower, more sedate, unconventional and downright feathery mode of transport is this month's
“Heeeellooooe There!”.

Sure maybe you wouldn't want to use him for long journeys, mainly because he is extremely dinky in real life and to be honest he's a bit out of practice after having been in a cabinet for such a long time. 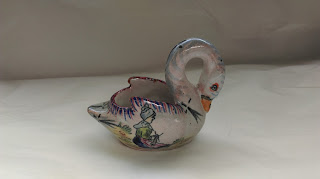 I know what you're thinking, “A swan is not a mode of transport!” but I would counter this with, “Have any of you seen Doctor Doolite?” the original of course... He had this amazing great big pink sea snail and no one questioned this as a mode of transport when it was time for Emma to head back to London! I absolutely love this film, but back to the swan :)

With a fleur-de-lys painted on one side of his body and a lady in traditional dress knitting on the other it could have possibly been produced by Quimper Faience in Brittany, France. This pottery's design reflects a strong traditional Breton influence and a lot of the older pieces are strongly sought after.
Luckily for us this little guy is staying firmly at Hill Top!

He may be petite but he wears some pretty flamboyant eye makeup.. I mean red eyeliner? That's a bold statement but he is definitely working this look. I myself might give it a miss, with my extremely pale skin I worry I'd end up looking scary rather than spectacular!

Whether you choose a ship or a swan to complete your journey you'll need to have a general idea of which way to go, don't you?

This is down as an ornament on our inventory, it lives in the ivory cabinet but to be honest I'm not completely sure of it's actual purpose or even if it has one..some things are 'just because'.
What are your thoughts on it? 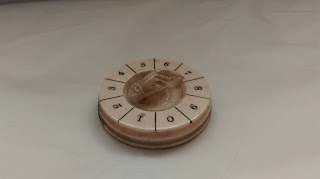 The hand in the middle twizzles around and to me could point you in the right direction – in my mind the numbers could even be routes? (Does this make any sense or is it just something in my mind??)
My other thought about it was that it reminded me of the big hand from the old lottery adverts..

Anyway I digress, this object came from London and is marked on the bottom ‘H Rodrigues, 42 Piccadilly, London’ – but apart from that we can only guess about its history. Could this have some to Beatrix from her parents or grandparents along with the other bits and bobs of ivory?

My own history with Hill Top and Beatrix has only been relatively small; about 2 and a bit years (ish) but like Beatrix I’m going on another little journey of my own.
I’m happy to say that I’ll be working over at Townend from mid-July until the end of October on a little secondment 

However, never fear, this isn’t farewell, we all take different paths on our journeys and you’ll still find me strutting my stuff up and down B’s path one day a week. 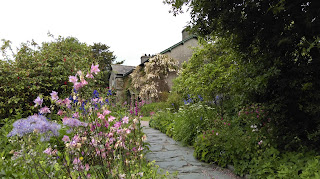 There is actually a little connection with Beatrix and the Browne’s of Townend but more of that next week!

See you all in July!

Words and photos by Natalie 