B is for Beatrix and Birthdays :)

Beatrix and I have something rather special in common   - it’s both of our birthdays this month! By the time that this post goes up on the tinternet it will have already been Beatrix's. B’s is on the 28th and mine… it’s today! J
I wonder how B would have celebrated her birthday? I would like to think that she would have celebrated in some big way but really I think that she would have had a quiet one with William at her side. You may remember my first blog post, approximately 2 years ago now, when I wrote about Moss Eccles Tarn (and coincidentally lost my car keys whilst trying to take some photos of the water lilies). I told you how Beatrix would draw whilst William would row on the tarn, it sounds like a pretty idyllic day out on a summer’s day.


Last month I told you about my move to Townend and, well it’s happened, I’m here and I’m really enjoying it!


I found out a surprising connection between my newly adopted family, the Browne’s (who lived in and owned Townend) and Beatrix. Whilst doing a spot of research on the house and the family for my tour I found out that B would visit Townend when the last Browne, Clara, was living in the house.  We know that Beatrix went and had a look around the house and is known to have passed comment on Mr Browne's prized carvings. It is said that she called him “The tiresome Mr Browne” and that he had the outdated Victorian habit of over embellishment.


Clearly she wasn't a fan of the work he had put so much effort it to.. my Dad has a very similar opinion, he loves old furniture and antiques and doesn't like that someone has changed them... in his eyes, not for the better. Troutbeck however, he loves. But that's ok, we all have different opinions on things and that's what keeps things interesting.


If you have a spare hour or so I think you should definitely pop over to the house up in Troutbeck and come have a look around this Lake District gem for yourselves :) (Can you tell that I'm enjoying my time up here much?)


If you're anything like me summer will make you think of the sunshine, bbqs, eating outdoors.. ice creams (I'll look like an ice cream soon.. )and beer gardens.. but one thing I've been fancying recently is a spot of afternoon tea.


One of my favourite cups and saucers that Beatrix owned is this little set..
﻿﻿ 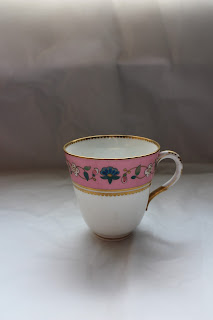 They're rather striking and have always taken my eye. And coincidentally I am told that they came back to Hill Top from Troutbeck Park Farm just up the road.


Officially this one is down as a coffee cup. I'm strictly a tea girl myself (the smell of coffee I can do, I can even handle a slice of coffee cake but the real stuff.. no thanks). However that doesn't put me off, I still love these with their gilt rims and painted flowers these pretty things were made by Royal Worcester in around 1870.

Ironically I used to hate pink, I used to think it was a “girl’s colour”, yellow was my favourite colour and still is but now I love it and I love these! I don't think of myself as one of those olden day ladies by any means but I could just see myself having a cup of tea in the garden with these... and maybe a delicious scone as well.


With its new replacement handle this cup has certainly seen better days but on the flip side maybe it means that it's also been well loved and well used?
They date from approximately 1770 made in porcelain.. The original handle was replaced with a woven rush one at some point but when it was attached a crack appeared at the bottom. Do you think that the cup was dropped, overused, or maybe it was always a tad bit wobbly? I don't know, but whatever happened to it and wherever it comes from I think it's absolutely charming!


They are one of a pair and the other cup and saucer are in good health but I like this damaged two piece better.

Think having two of these is a good thing? Na, it means there are two of the things to look at! Don't get me wrong, I would never try and hide them behind something so they can never be seen but personally, they're not my sort of thing...


They're Staffordshire and made between the late 19th and early 20th centuries.  Each ornament has both a girl and a boy; they have white hair painted brown, blue shoes and shells around the base... They're just odd haha.


On that bombshell I'll be off.. (to London where we'll be celebrating my birthday :) ).


Have an absolutely fantastico weekend, I hope the sun shines where you are :)


Words and pictures by Natalie