I've recently returned from what is becoming an annual pilgrimage to the Isle of Harris in the Outer Hebrides. The island is almost totally devoid of trees and nobody bothers much with gardening, so quite an odd choice of destination for a gardener you might think. Well apart from it's stunning scenery, empty white sand beaches, friendly locals and an almost complete lack of tourists, Harris is famous for its machair.
The machair is a belt of land next to the western coasts, formed when shell-rich sand is blown onto the natural peat soil, resulting in a rich, fertile environment where an incredible variety of wild flowers thrive. The bit of machair behind our holiday cottage boasts over a hundred species of wild flowers.

It's a depressing thought that large areas of Britain were covered in wild flower meadows similar to these before they were sprayed off, ploughed up and replaced with monocultures of Italian ryegrass. Lets hope the Harris machair can avoid a similar fate.

Unfortunately, while I was away I missed all manner of events which had been arranged after we booked our holiday. These included my Auntie Margaret's 90th birthday party, the National Trust Gardens Conference and worst of all a visit from Carol Klein of Gardeners' World fame! She was filming for a BBC series called 'Great British Garden Revival' to be shown in Spring 2014. September is a curious time to film a cottage garden but I hope it wasn't looking too bad (tv cameramen can do wonderful things)! 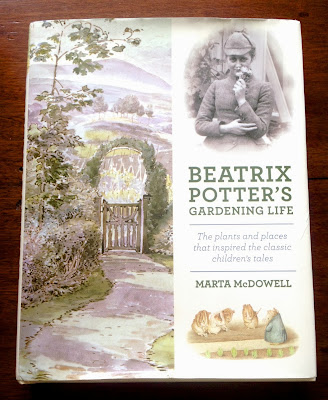 More publicity for Hill Top garden in the shape of a new book by an American lady Marta McDowell who visited last year and spent an afternoon helping in the garden. Her book is called 'Beatrix Potter's Gardening Life' and is a very interesting read with some old photos of Hill Top that I hadn't seen before. It hasn't been released yet but in a couple of weeks it should be on sale in the Hill Top shop.

Finally my plant of the month is this-

It's a Virginia creeper (Parthenocissus quinquefolia) which grows over my garden wall and has burst into spectacular early-autumn colour over the past week. What you can't see is that on the other side of the wall it's threatening to take over the rest of the garden and most of the village as well. Time to get the secateurs out I think!