From Tony Blackburn to Fearne Cotton, whatever age bracket you fall into I am sure that you remember listening to one music countdown or another, therefore I am sure the format of this month's 'Behind the Scenes' blog should be fairly familiar - No need to panic just yet, Pete. I'm not going to include any musical links in my post.

Instead of counting down musical entries I am going to count down the top 5 items that the public and our lovely visitors ask about on a daily and weekly basis.
The ones that you will read about are all contenders for the top spot but only one can win the coveted position. Are we ready? Here we go!

At 5 is a firm favourite.
It's the bittern! This fellow has taken up an elevated position and stands upon the aptly named 'Bittern Bureau' – a coincidence? I think not!

He is often mistaken for a heron but this guess isn't too far off, both are after all, wading birds. It's widely accepted that Beatrix had a passion for natural history so I don't think it's too odd that she had this little chap at Hill Top. Where she got it from however or from whom, well, that is another matter entirely. 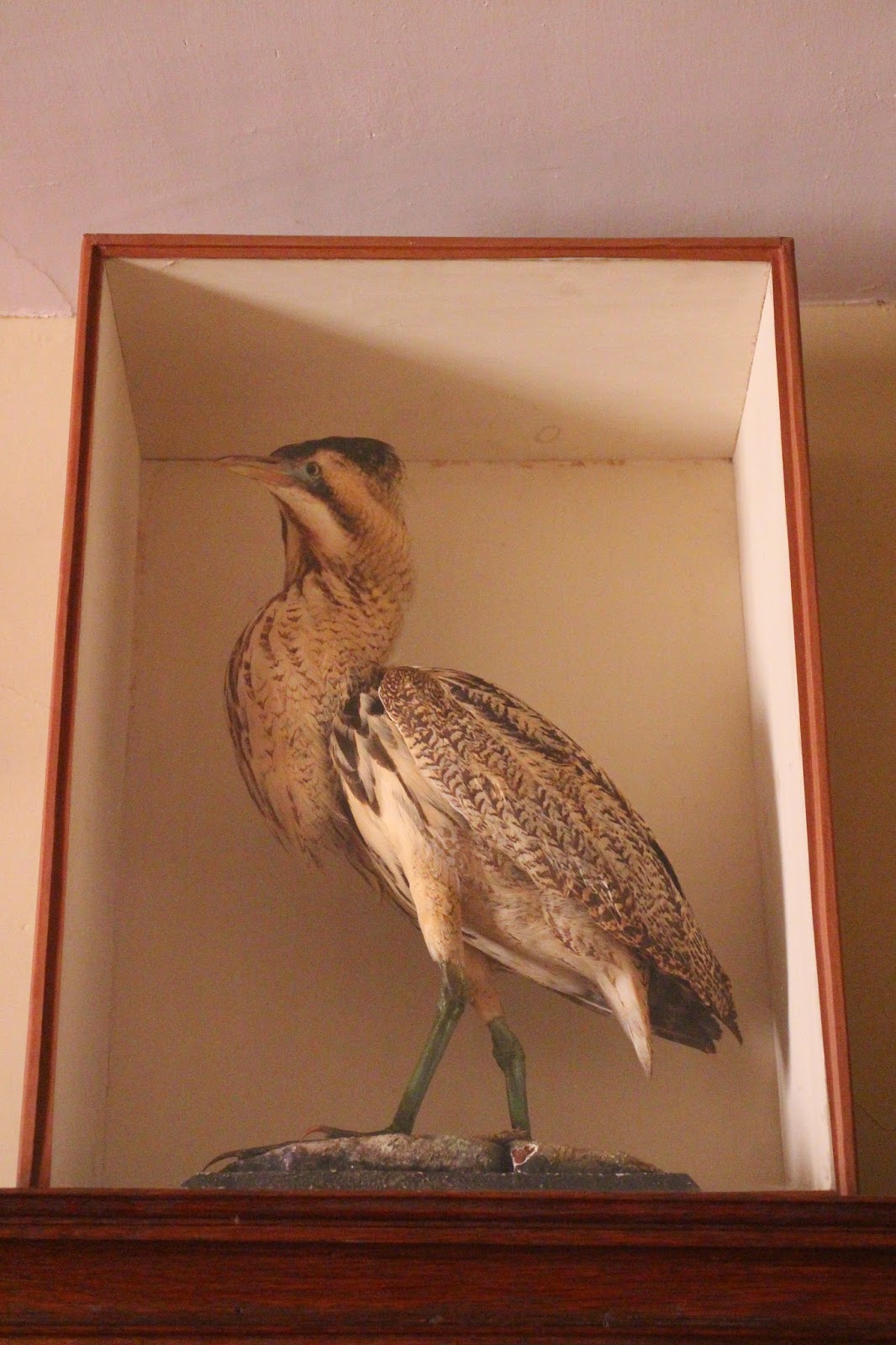 What lovely long legs you have...

Holding strong at 4 are the set of 5 oil paintings that are hung in the New Room, painted by Bertram Potter (Beatrix's younger and rather talented brother) which were given to her as gifts.

From looking at them I bet you can guess what the comment we receive most often is, “Oh my gosh! Aren't they dark!” And yes, they are pretty dark, and to be honest they aren't my most favourite things in the house ('Crikey' you're thinking, one thing she doesn't want to take home!) B must have liked them and perhaps even had a little pride in the fact that her little brother had such a love for art.
If I had to choose the one that I liked the best, it would have to be this one entitled 'Scene in a Pine Forest with a Stream' – err... catchy title, eh?! 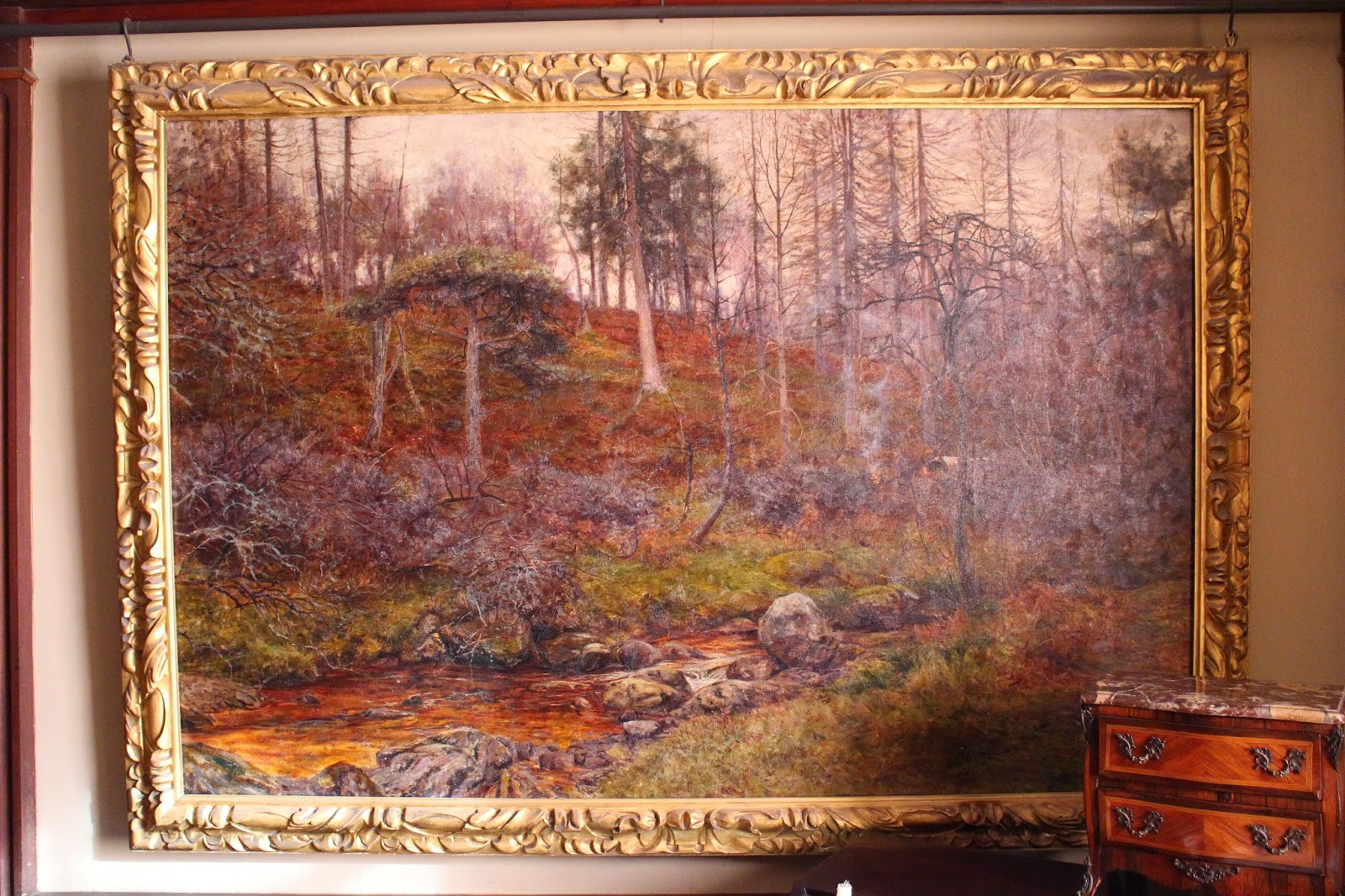 Just look at the size of these whoppers!

Totally overshadowed by Beatrix, Bertram wasn't a terribly famous artist and these aren't his best work. Like Beatrix, he had an immaculate eye for detail, something I hope you'll take my word for.

Number 3 on our countdown is something that I haven't been asked much about this season although I'm sure that my colleagues might have had a different experience and disagree with me.
Here they are, essentially pieces of wood held onto the underneath of a beam with a bracket. 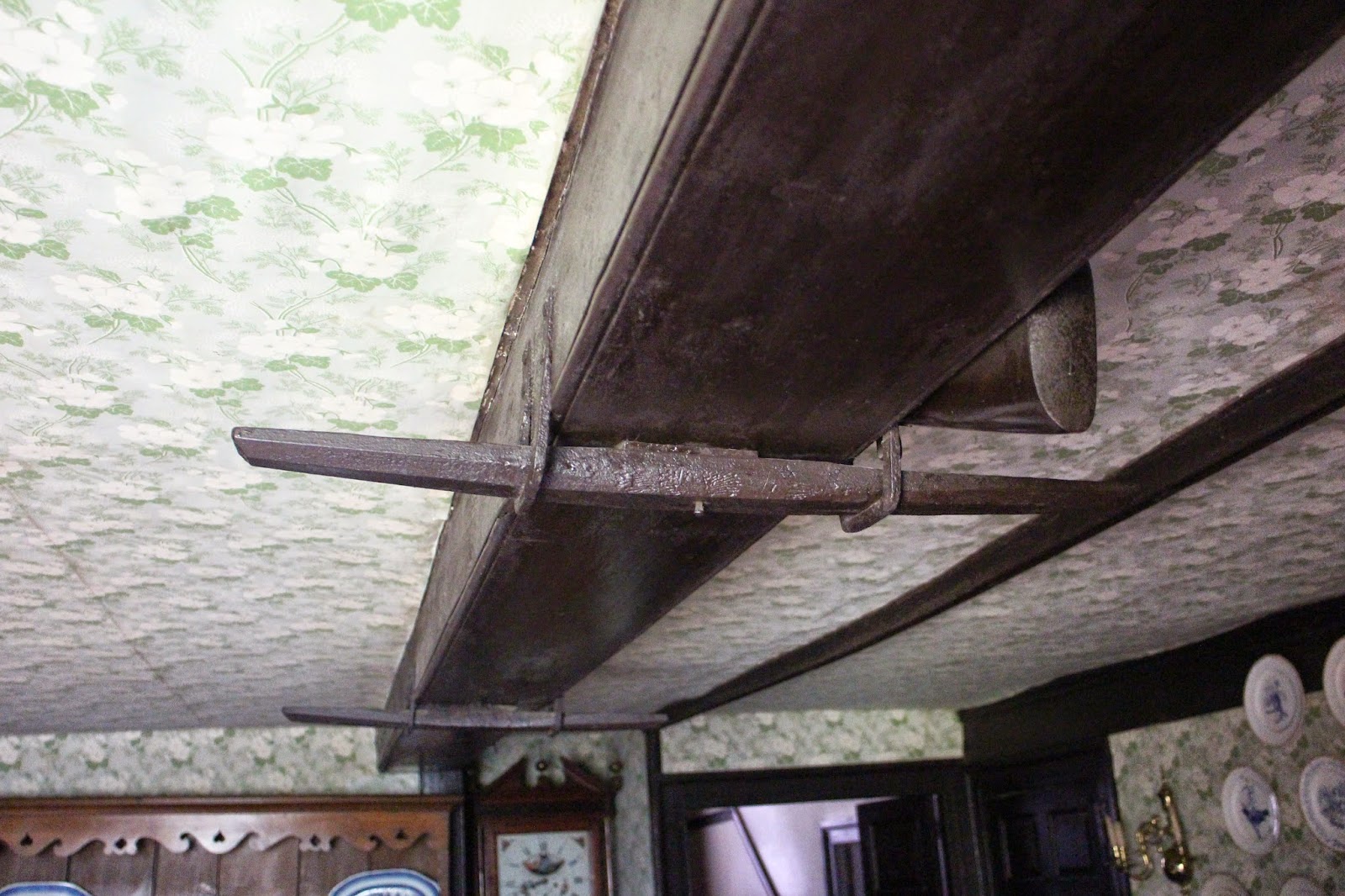 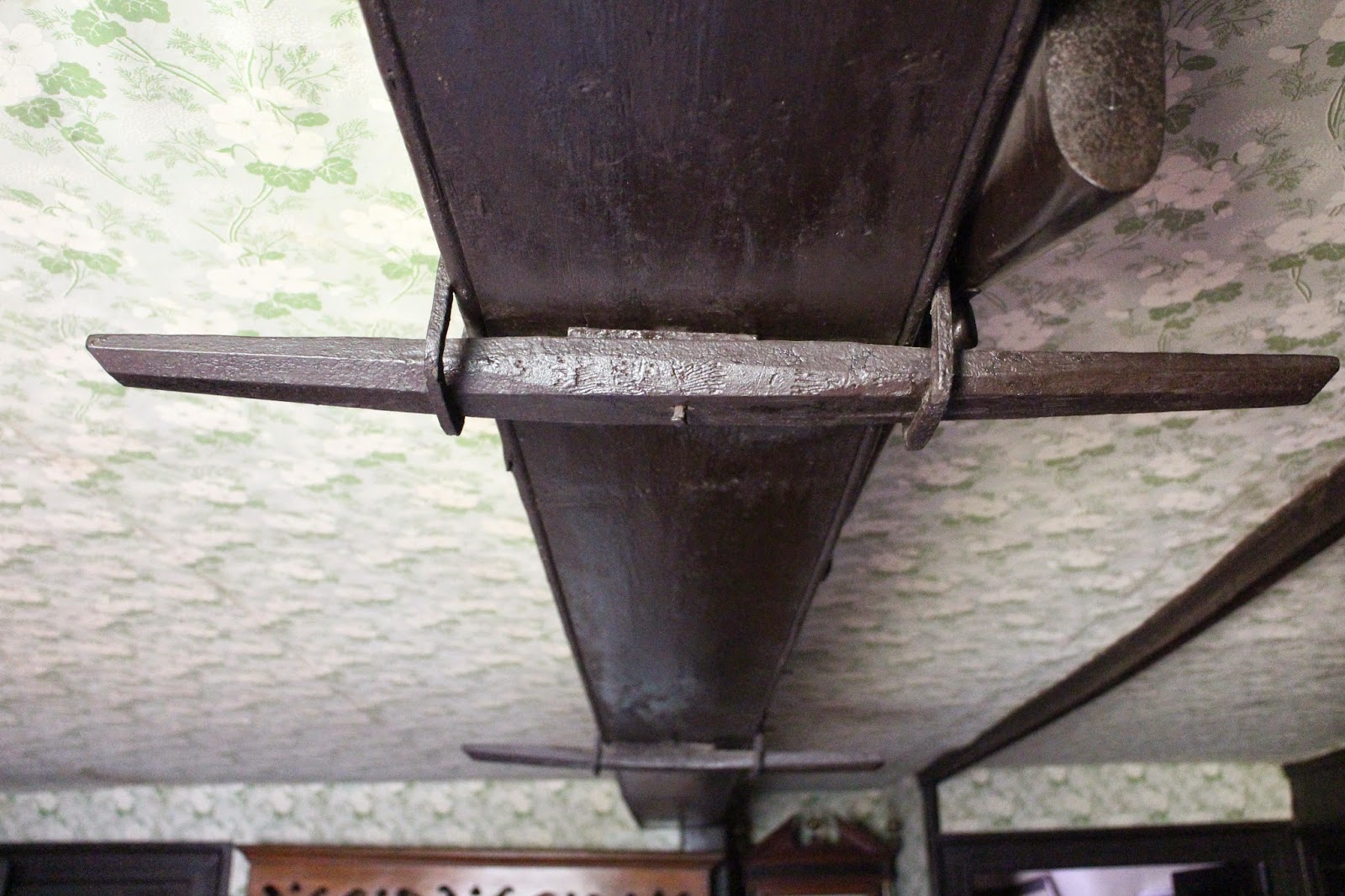 One rather hilarious suggestion I've received for their use is for exercise, namely pull ups! Can you imagine B doing them? I won't tell you what other bits of furniture that people have suggested could be used as workout equipment but there have been a fair few.

So what are these things? In fact, the truth is far less amusing but no less interesting. They are shelf supports and in another life they would have held up planks of wood. Upon these you would have been able to store things, or perhaps you would have out  food up there to cool after cooking. We like to joke that we keep our choccy biscuits up there away from potential critters!

I'm going to take a small intermission at this point to introduce this month's..
“Hello there!”
There is a poodle in the Sitting Room cabinet who is so. Weird. I'm sorry to say it but I think it is, I don't even know why I like it (but I do :) )... And he's rude, look at this, he's turned his back to us. 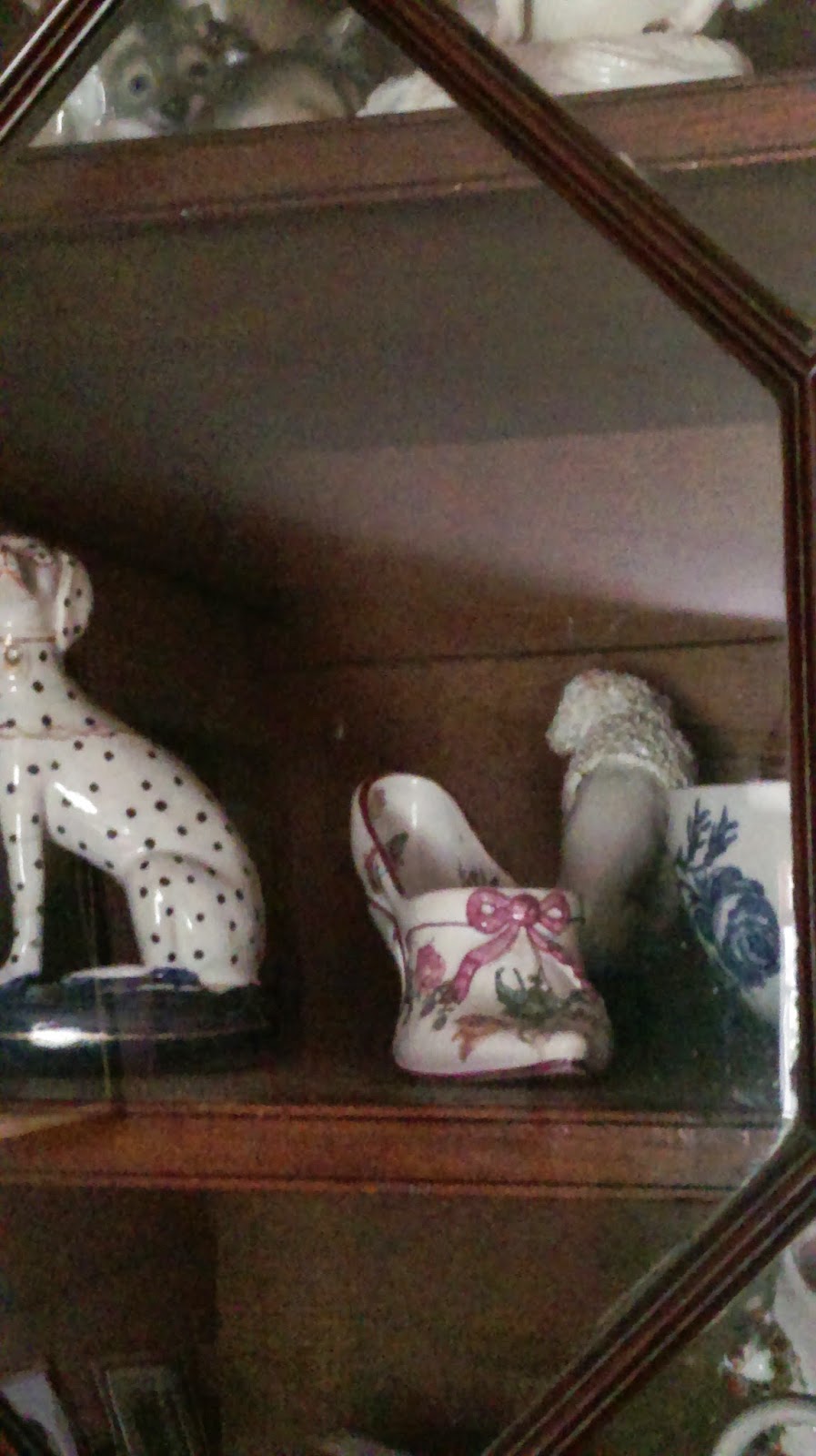 To be fair it's not totally his fault, he spins around in the cabinet because of the vibrations from the floor caused by all our visitors feet.
He is made of porcelain, is in the style of Chamberlain of Worcester and dates back to the early 19th Century.
He's just one of the doggy ornaments, figures and pictures in Hill Top. B had several dogs herself throughout her lifetime, perhaps they came second to her beloved rabbits? See how many you can spot on your next visit to Hill Top!

Back on with the chart!
Climbing high at 2 are the plates on the kitchen wall. 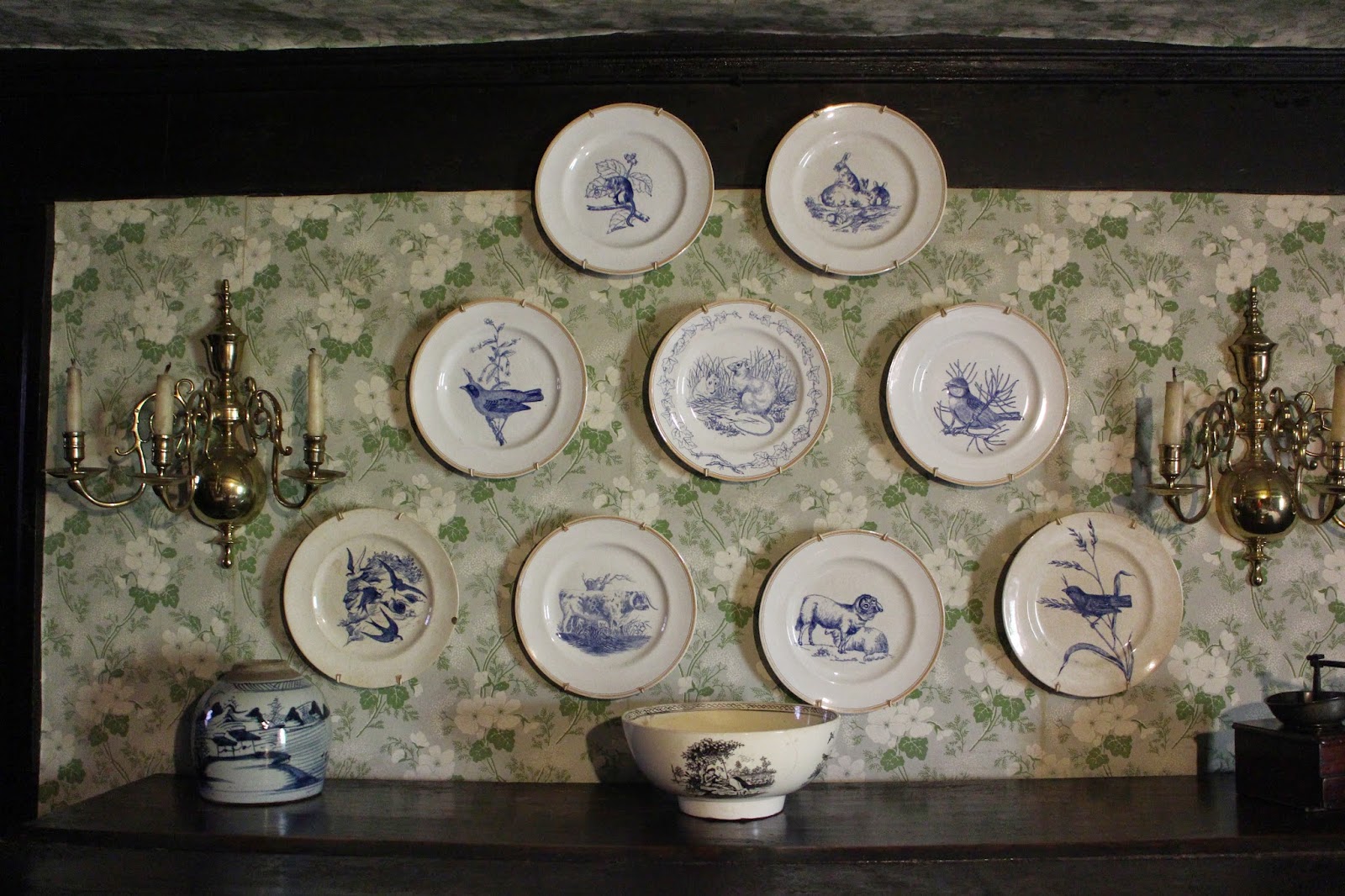 How similar the subject matter is to Beatrix's. In spite of the similarities, they were not painted by her but her father Rupert Potter – it seems art was a family affair.
By all accounts he was quite the talented amateur artist and had a great enthusiasm for art and photography. I like to think that B got some of her natural talent from him as well as her love for painting animals, although there is no denying that her work is much finer. 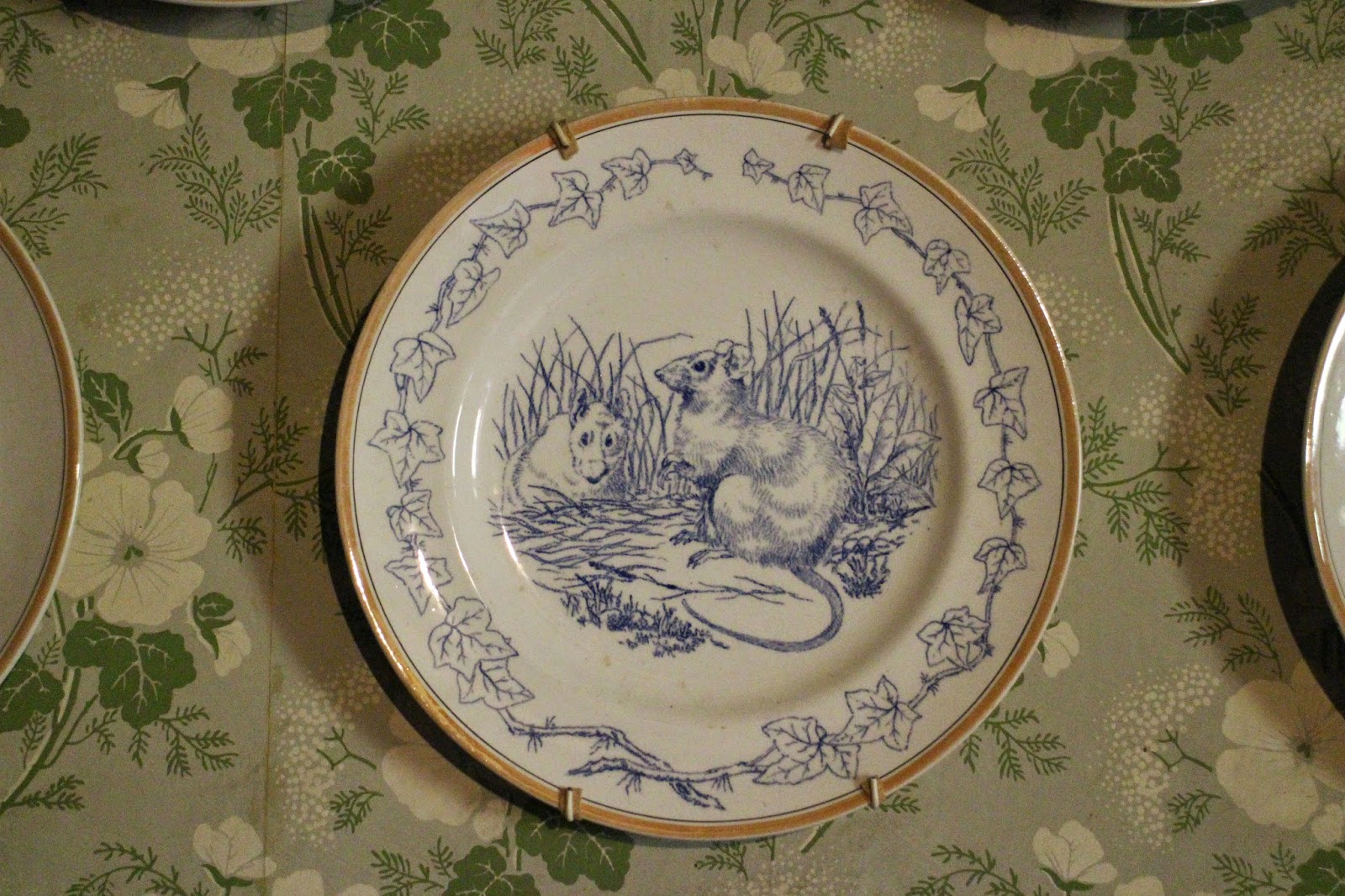 These pretty plates have been transfer printed and given to Beatrix as presents during her childhood, hanging on her wall in Bolton Gardens, her childhood home, it is no wonder that they have a special place in her first and favourite Lake District home.

Soo.. before we find out what the most asked about object at Hill Top is, here are numbers 5 – 2.
At 5, it's the long legged Bittern.
At 4 are the enormous paintings in the New Room.
3's just hanging around, it's the shelf supports.
2 are Rupert's plates that have pride of place on the kitchen wall.

On today's countdown the number one spot goes to.. (drum roll please)

The clockwork roasting jack!
Hanging next to the range this beautiful brass object gets a lot of attention on any given day at Hill Top. This interesting machine rotates the meat roasting from it's hook and aims to cook it evenly on all sides by rotating clockwise and then anticlockwise and so on. 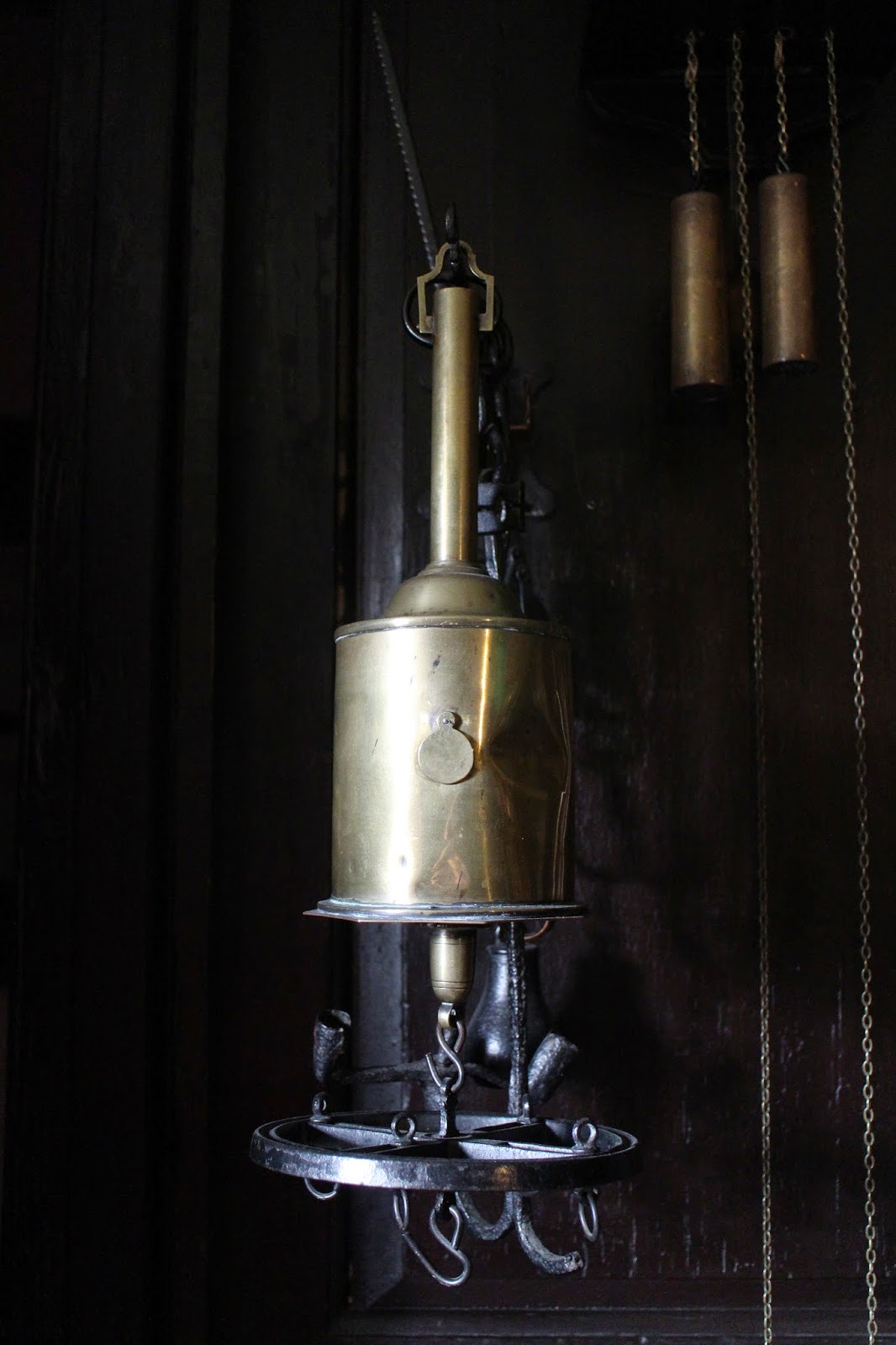 I've heard it called a bottle jack, I don't know how true this is as my dad hasn't heard of it before (and he is the go to man when talking antiques!) but it's said the name comes from it's shape – like a wine bottle.

Unlike many people, I originally thought that it's hook was for cheese (don't ask me why I thought this, to this day I still don't know what was going through my mind) but my friend and colleague, Jane, pointed out that this was ludicrous resulting in a little light teasing every so often.
Unfortunately we don't have the key so we do not know how it runs or if it even still turns.

In spite of this, I think it's totally gorgeous and would have it in a second!

Wow, what a range of objects in our countdown and this week's blog.
You never know, the top 5 might move around a little bit by next year, it's all up to you, our visitors :)

As always I hope you have enjoyed reading this broadcast, come back next month for more 'Behind the Scenes' action where I will be talking about what we actually do when we are closed on a Friday and over winter :)