Go forth and propagate!

It's starting to seem like the back end of summer in Hill Top garden. The Eucryphia has finished its all too brief flowering, most of the roses have dropped their petals, the alchemilla flowers have turned a crispy brown and as I write this a fine drizzle is enveloping Near Sawrey.

But there's still plenty to see in the borders; dahlias, phlox, buddlia, soapwort and even my very late germinating sweet-peas are  looking (and smelling) good. The veg garden has been quite productive despite the attentions of my furry nemeses, with beetroot ready to harvest, leeks growing nicely and autumn-fruiting raspberries just starting to crop. At the bottom of the main border is a very healthy-looking pumpkin plant, which at one time threatened to take over the whole garden! The fruits are growing at quite a pace and may even be good enough for the world famous Sawrey Marrow Show held at The Tower Bank Arms (next door to Hill Top) on September 15th.


There's a red hardy fuchsia round the back of Hill Top away from the public area which matches one that Beatrix described in one of her letters.  It's flowering beautifully at the moment and really deserves a wider audience. It's an old bush so rather than try to dig it up and risk it dying in the process I decided to propagate it from cuttings.
Fuchsias are very easy to grow from cuttings, just select healthy, non-flowering shoots and snip them off with secateurs. Remove most of the leaves and trim them to about 5cm long. 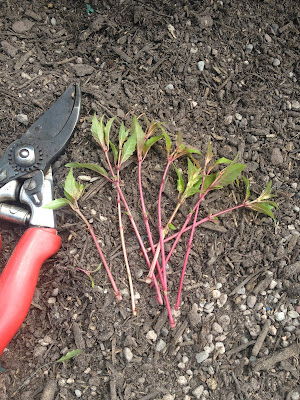 Then dip the bases in hormone rooting powder and 'dibble' them into a pot of compost with a pencil or a bamboo cane. 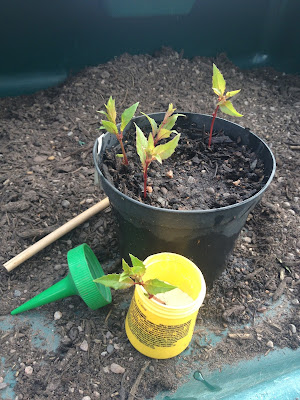 Water them well and put a clear plastic bag over the pot to stop the cuttings from drying out. Put the pot somewhere shady. 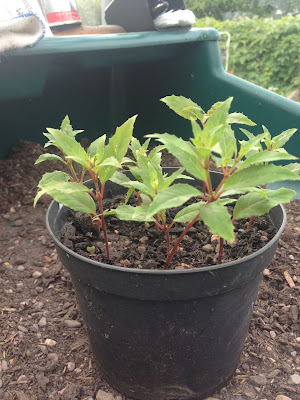 After a couple of weeks remove the poly bag and put the pot in a greenhouse or on a sunny windowsill. When you can see roots coming out of the bottom of the pot, tip the cuttings out and pot them up seperately. Keep them in their pots over the winter and plant them out in the garden (or a bigger pot) in the spring. It's as easy as that!

See you next time.

Words and pictures by Pete the Gardener.