Hill Top is very busy at this time of year so we thought we'd chill out by looking at some of Beatrix's (and our) favourite things.

Harebells were one of Beatrix's favourite flowers.  These might well be the descendants of those Beatrix and William enjoyed on walks up to Moss Eccles tarn.
Rabbits have to get a mention!  Beatrix had a Belgian rabbit called 'Bounce', the original 'Benjamin Bunny'.  I'm not sure she would have been so pleased to see these rabbits coming through the fence into the orchard and eyeing up the vegetable garden.  The old apple tree may well have been a youngster when Beatrix was around. 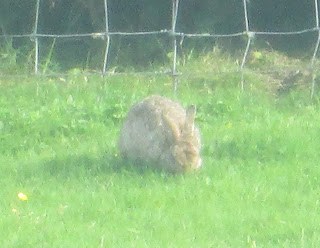 Dogs were very much part of Beatrix's life - as a girl she had a spaniel, Spot, and later pictures show her with a sheepdog, Kep, and Pekinese.  John Joiner, the terrier, is one of my favourite characters.  Nowadays Sam, the working cocker spaniel, keeps us company in the ticket office (see Dog on the Blog- although some visitors today looked in his cage and mistook him for a bear!  I think they were joking.
In Beatrix's day people studied butterflies by catching them and pinning them in trays.  Now we can snap them with a camera.  This Peacock butterfly is basking in the sun on the buddliea outside the ticket office at Hill Top. 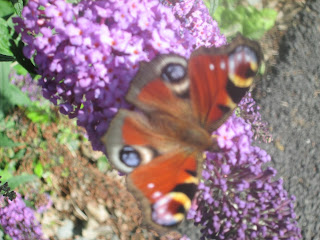 The Lake District is the amazing place it is today because of Beatrix's passion for buying farms.  Her favourite would always be Hill Top.  Facing south - ish, the front is bathed in sunshine (when it isn't raining).  I can imagine her looking out of the window in the New Room and searching for inspiration in the view over the village and up the track to Moss Eccles. 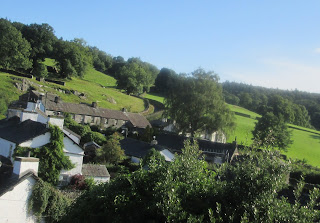 Yew Tree Farm near Coniston was another of the 17 farms Beatrix bought. This was where the film Miss Potter was filmed.  Beatrix introduced Belted Galloway cattle from Scotland.  They're a slow maturing breed which does well on the poor grazing of the Lakeland fells and produces excellent meat - which you can buy from Yew Tree Farm.  Seeing them in the distance someone once commented that it was good to see we were breeding pandas in the Lake District.  Hmmm...
Beatrix was a great champion (and a judge) of Herdwick sheep.  The lambs start off black and turn paler with age but the faces are always white. 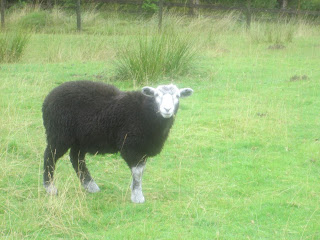 With the important exception of the rather foolish Jemima Puddleduck, Beatrix didn't seem to have as much connection with birds as other animals.  Neither did she have to worry about computers!

We would rather be chatting to visitors than checking our emails so thought we'd recruit a new member of staff!  Meet Orinoco.