"Pace" yourself this Easter!

We've (hopefully) passed through those dark, rainy and particularly nippy winter months up here in the Lakes. Although no one seemed to tell mother nature – did any of you also have snow last Thursday?! However, I am extremely happy to see the sights of Spring all around me, I've spotted lambs in the orchard, the flowers are trying to poke their heads trough the water logged soil, there is an egg in the garden (although unfortunately not the delicious chocolate kind!) And at this moment I wish I hadn't previously spoken to you about Beatrix's egg heads!
I for one am definitely looking forward to the warmer weeks that we will hopefully have coming up (maybe that's because I'm a summer baby) even if they don't always like me – I'm pretty pale, almost translucent some could say, so it's factor 30 all the way!.

Spring is not the only thing to have arrived; Easter is here and will be in full swing by the time that this post hits the interwebs.

Trying to think of ideas for an egg-citing entry I'll admit that I found this month's post one of the most tricky, and to be honest I've been putting off writing it for quite a bit. One thing was certain, I wanted to link it to Easter somehow and making it interesting without using too many of those terrible egg puns (though saying that, I seem to have lost some of my willpower and have used quite a few!)
A bolt of inspiration hit me quite uneggspectantly. The other day I remembered an old photograph that was taken by Beatrix up at Hill Top that we have in the collection.

The photo I was thinking of is of a small group of Pace Eggers outside the front of Hill Top. 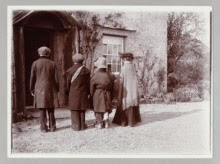 Sometimes these groups are also known as Mummers, they are people who perform traditional folk plays – you are perhaps thinking that this is old fashioned but surprisingly these groups are thriving across the country.
Back to the Pace Eggers, you're probably thinking 'What the heck are they?!' and to be honest before (finally) settling down to write this post I had no idea either. 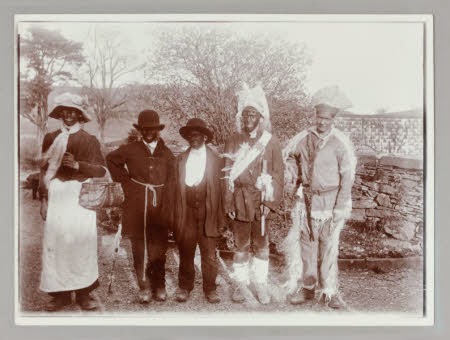 After a smidgen of research I discovered that 'Pace Egging' dates back hundreds of years and has been recorded in several northern counties including Lancashire (in which Hill Top used to reside) and Northumbria.

Essentially Pace Egging is a folk play that revolves around a rebirth theme and has strong references to the crusades. It is primarily performed on Good Friday (I think) and according to my research it involves St George fighting many foes including a Turkish Champion. By a sick twist of fate St George then dies but is later brought back to life by a comic doctor.
The Mummers are known to go all out on the costumes; they often blacken their faces for the performance and like to have a bit of craic with the crowd.

Oh and did I mention many groups give several performances on the same day, each at a different pub? So, in my mind it's a bit like a play mixed with a pub crawl – and that can’t be a bad thing!
Unusual it might be but I think it sounds great, so different to anything you would see today and in a way it's totally “British” and we should celebrate our quirky British heritage a bit more often.

Also, is anyone else getting the impression that this slightly follows Jesus' resurrection – although Jesus didn't wear chain-mail armour, or fight dragons, apart from that it's totally similar …

This tradition had all but died out after the First World War when many of the men who would have taken part and performed in this folk play died in action but it's since been brought back to life and is going strong across many northern towns.
This type of folk play can be seen in many locations this year including Middleton, Heptonstall and Bury amongst others – I believe that there are several around the wonderful north so if you fancied seeing one I am sure you might be able to find an opportunity to go.
I for one am seriously intrigued by the whole thing! And would love to learn more about this little known part (for many people) of English heritage.
Who thinks that the north is even more amazing now?! Beatrix and I certainly do! #JustSayin'. And some of you may scoff and say, “pfft but you're Welsh” and yes I am but to that I would say, northern Welsh so it still counts!

If you want to know any more about this intriguing Easter tradition you can try this link or a generic internet search will also do the job.

Back to Beatrix! I've asked Liz why B took a photo of the group but I can only assume that they may have performed a play in the village or close by and she wanted to document it for the future.. maybe? She loved local folk law and the differences that could be found between regions and wanted to preserve them so that they could retain their individuality – this is one thing I have no problem agreeing with her on. 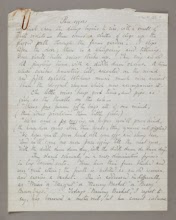 This would also ring true because we also have a short letter that came from Country Life Magazine  in which they send Beatrix a rejection for a short story that she wrote to the publication detailing an idea that she had for a piece about the Pace Eggers. We have a facsimile of the letter out at Hill Top and many of our staff, volunteers and visitors can't believe they rejected her, can you?
If, like me, you've managed to wangle this Easter off (I'm still not sure how I succeeded in this!) why don't you take a sneak peek at your local events and see if you've got a Pace Eggers play in your parts and help to keep this unique tradition alive? Or if Pace Egging isn't your thing then Hill Top is open throughout the Easter period, so come along and say Hi to the team!

As for me I'm off up to the North East to spend Easter with my girlfriend, stuffing my face with a choccy Easter basket type thing my Mum and Matt have put together for us, exploring a castle, a lighthouse and enjoying a proper Easter Sunday dinner :D

Whatever you get up to have an egg-stra fantastic Easter – the weather's not looking too bad.
Enjoy yourselves! :)