If objects could talk...

First things first, when did it become August?! I'm sure everyone will agree that this summer is going faaarr too fast!
Now that's dealt with, on with this week's post!

I am sure that all of my colleagues at Hill Top would agree that one question we get asked most often in the house is “What is behind this door?” or “What's in there?”. The other day, these simple questions got me thinking and triggered off a happy memory from my first encounter with the South Lakes, Hill Top and Beatrix Potter, not just her books.

February 2013 saw me interview for the position of seasonal Conservation in Action Assistant with the South Lakes. This required me to bring along an object to do a casual presentation on. It had to be something that I considered special, I had to tell it's story as well as how I looked after it.
I'm not going to pretend I wasn't absolutely terrified, because I was, but I was also excited.
I bet you're wondering what I chose? I took my Mum's pot cupboard. Originally used to house the chamber pot it has loooong thin legs, a little door on the front and a galleried top.

One stipulation was that it had to be portable; and despite the size it does have two little handles so I decided it met the criteria. If you asked Liz, our House and Collections Manager about it I'm sure she would say it was memorable!

I decided upon it because as a child I used it as my hiding place for 'special things' (and leftover food that I didn't want to eat and believed I could get away with 'hiding'). Without mentioning any of this to my youngest brother, Matthew, he had begun doing the same thing, using it as his hiding place. In fact it was still full of his things when I opened it at the interview, he had all his little Easter chicks and drawings in there ready for April – he's nothing if not prepared :)

After this little reminiscence it occurred to me that it didn't matter that there wasn't anything super rare inside objects or behind doors because what makes a seemingly straightforward object interesting is the stories behind them. And in the end, it's our own curiosity that pushes us to find out what is inside.

So, really, I can totally relate to our visitor's curiosity and I (not so) secretly ask similar questions when I visit historic houses.

With this in mind I began to look around the house for places that are kept hidden from the public (and some of us staff and volunteers) and here is what I came up with, I hope you enjoy it!

Whether we're asked outright or not, I think everyone wants to know what is behind a closed door.
There are three doors in the landing. One looks pretty unassuming and I suppose it is, but this cupboard has an interesting story.
Within this small space is where the original staircase in the house would have come up through the floor and you can see the remains of the stairs themselves in the left hand corner of the kitchen below. What I like about this little space is that it has been wallpapered, and it has been said that Mr S Whiskers tore a piece off the bottom with his sharp teeth leaving a hole where it once was! 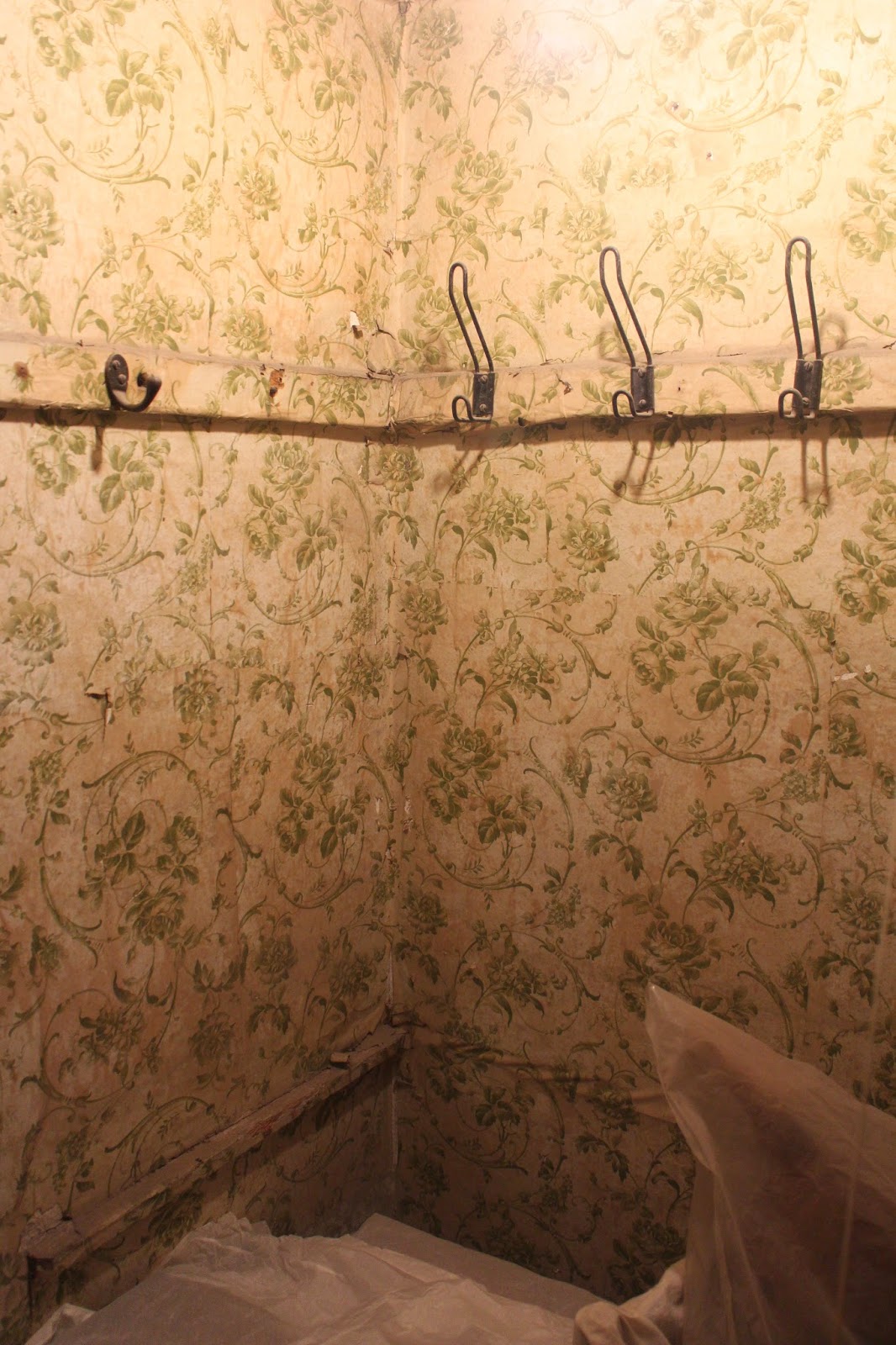 This little cubby also boasts a row of brass hooks put into the wall. From what I've picked up from Hill Top's wonderful volunteers this was Hill Top's wardrobe which makes sense when you think of the ladies' heavy skirts that would have required hanging to dry out. 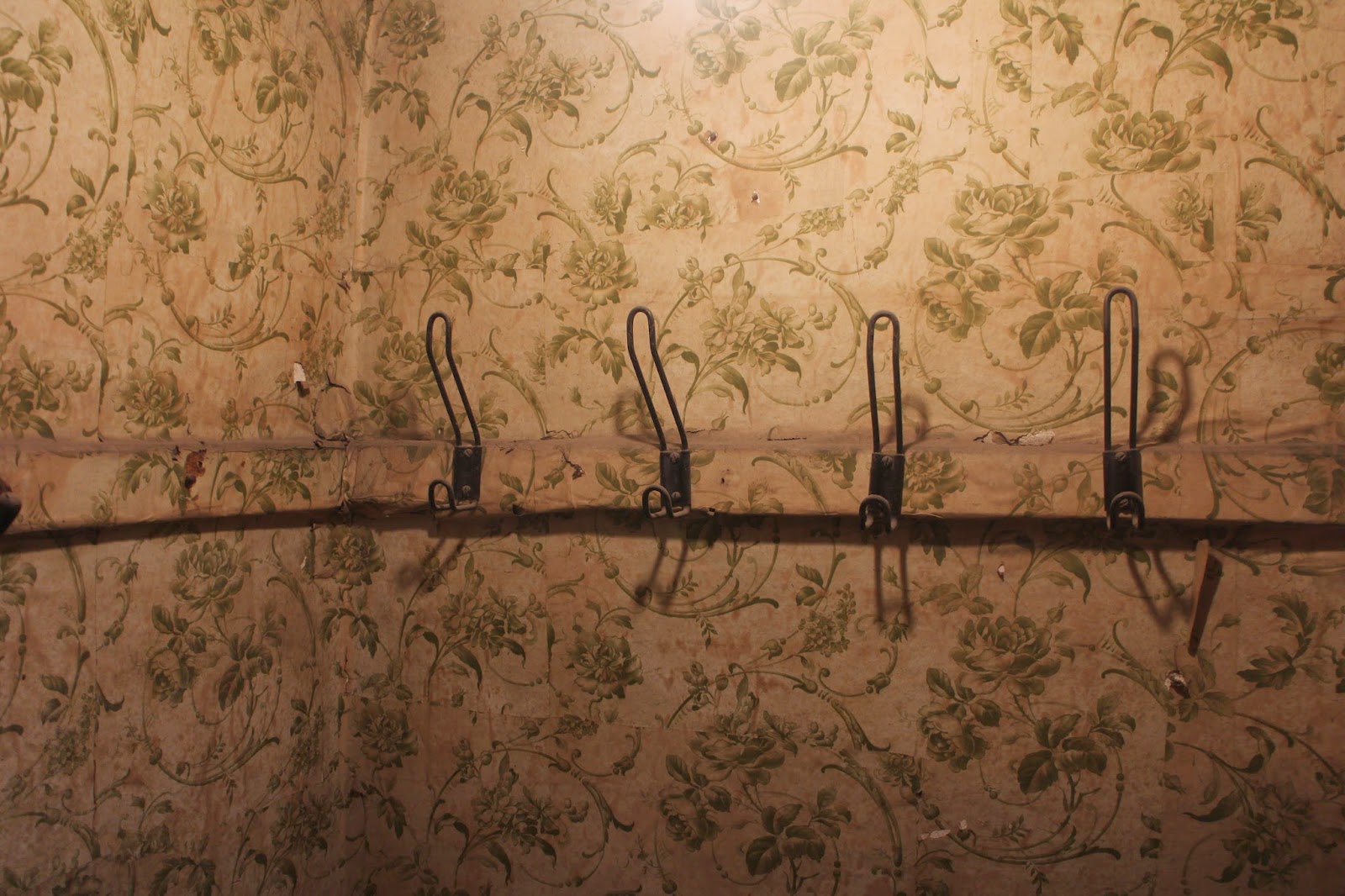 At the moment it's also a temporary home to the work-box from the Parlour, after a damp spell over the winter months when the house was closed he was affected and so has been placed up here for the time being to halt any recurring problems.

On your next visit to Hill Top, if it's quiet, be a little cheeky and ask the guide on the landing for a tiny sneak peek inside! It does happen now and again :) 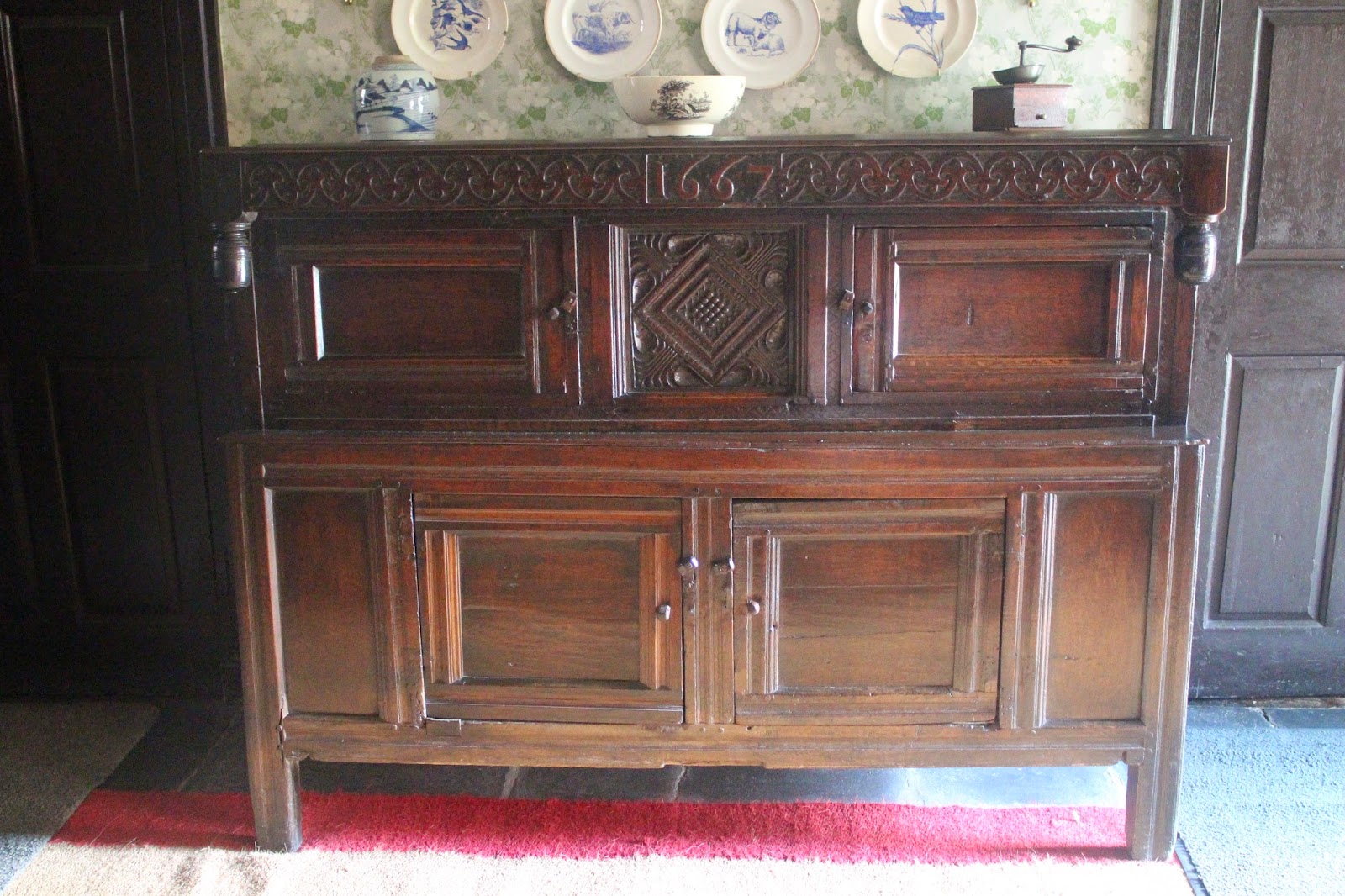 I was poking around the other day, looking for something or other in the old court cupboard when I felt a smile come across my face. This piece of furniture dates from 1667 and is of Westmorland origin. 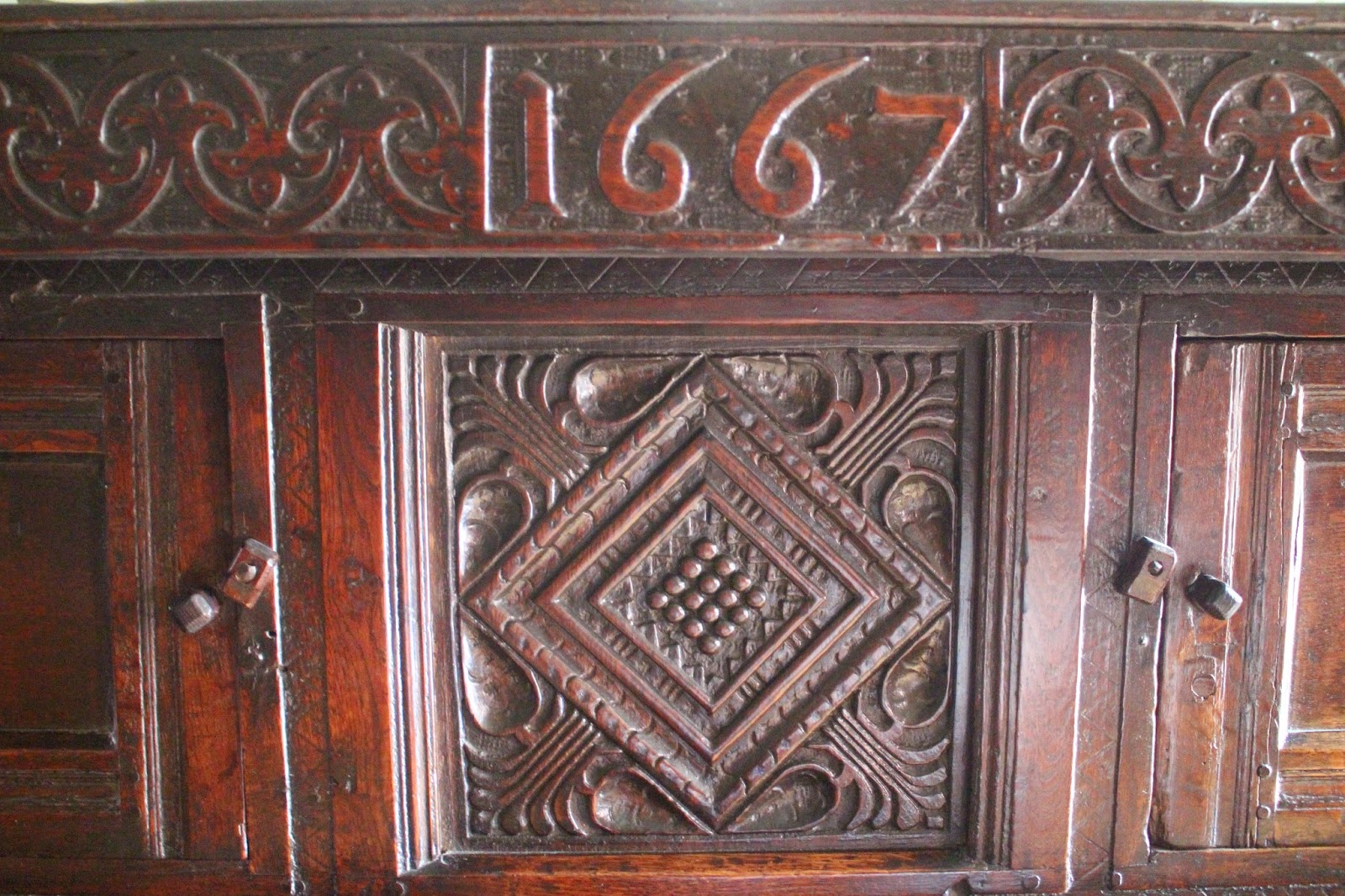 Westmorland was one of 39 historic counties in England before it was swallowed up and became the 'new' county of Cumbria in 1974, along with Cumberland and parts of Lancashire and Yorkshire.

Beatrix recovered this piece from an old farm property and I have previously heard that it had to be practically pulled out of the wall – I hope it's true because I love the image of the house not wanting to let this gorgeous piece of oak go!

This is one piece of furniture that people instinctively want to have a look inside. 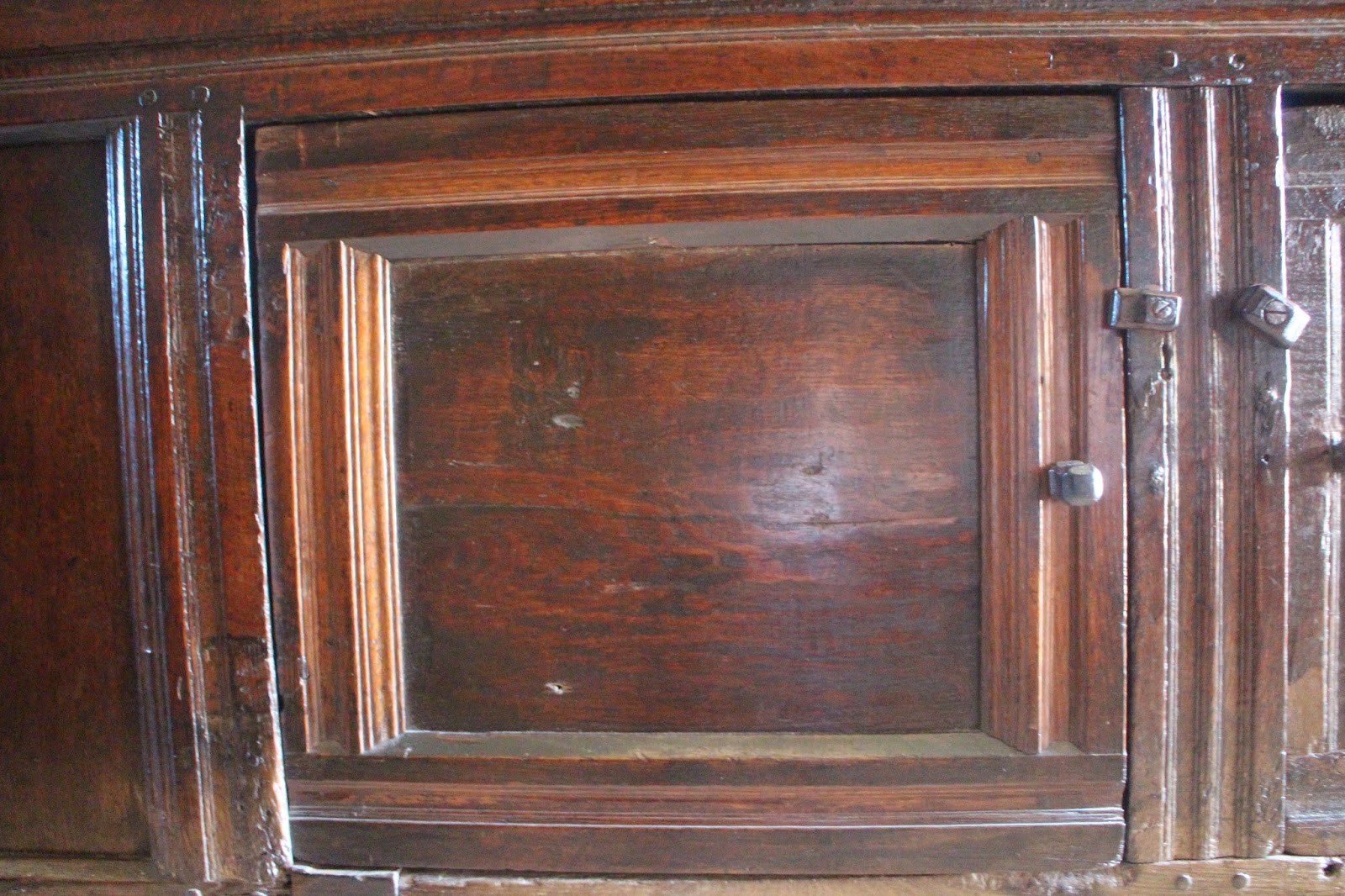 But what is inside do you think? Something special?
Umm.. well sort of. It's full of books, lots of books and other bits and pieces, I believe the Beatrix Potter Society visitors book resides in there somewhere. 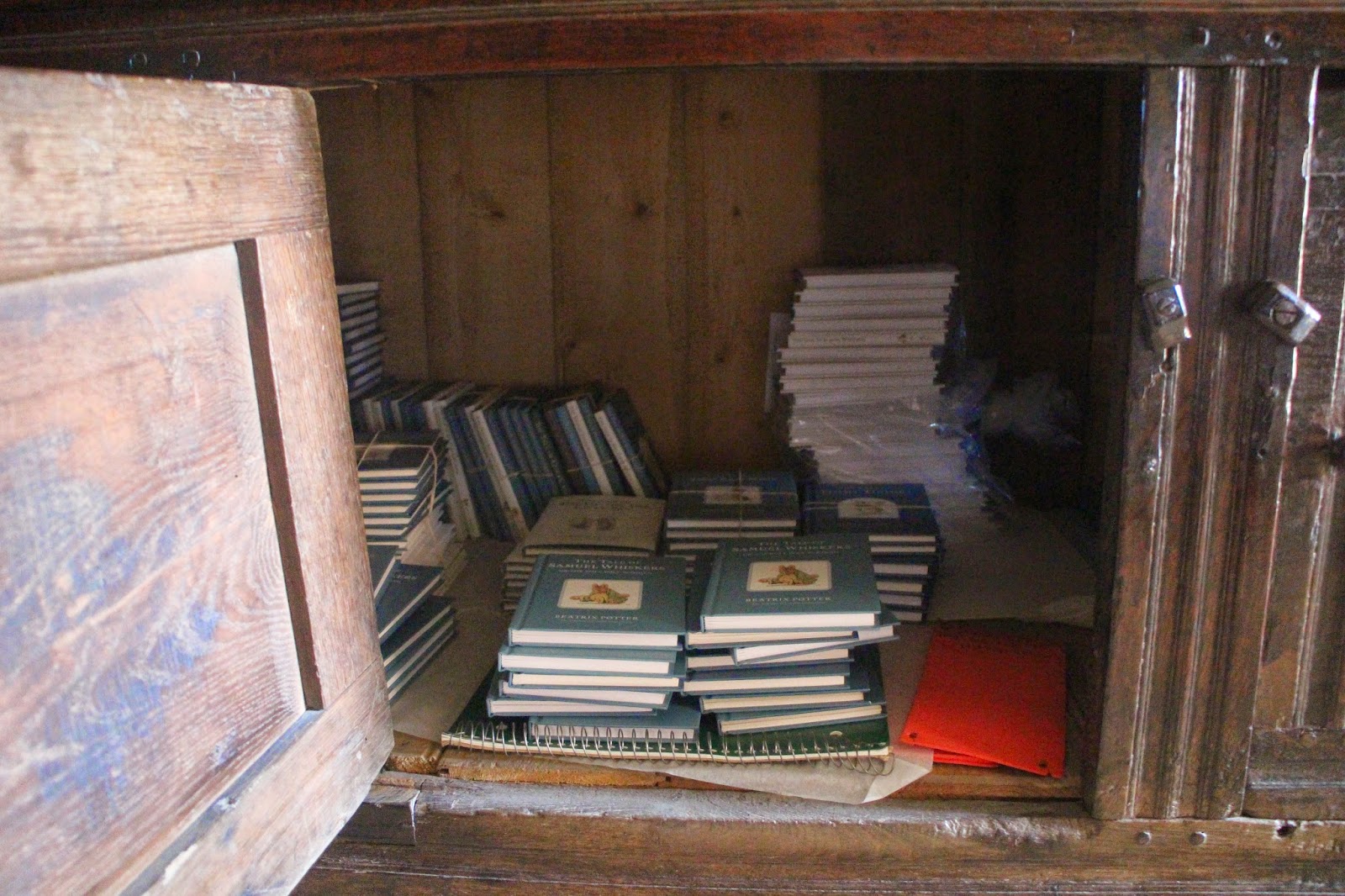 Basically we still use it for it's original purpose – storage for our bits and bobs, not unlike my brother and his pot cupboard (did I forget to mention he's laid claim to it now as well?) I love that this magnificent oak is still strong enough for us to use it as it was intended.
B must have loved this piece of furniture as she called it her 'favourite court cupboard' in a letter from 1940 and I can certainly see why!
There is a lock plate on one side... I still haven't worked out quite why it's there. Although I suppose recycling is no new thing.

I have been gagging to get this in a blog post from the start and now I finally have the chance! It is stun-ning and all of us at Hill Top get asked a lot of questions about it but what exactly is it? 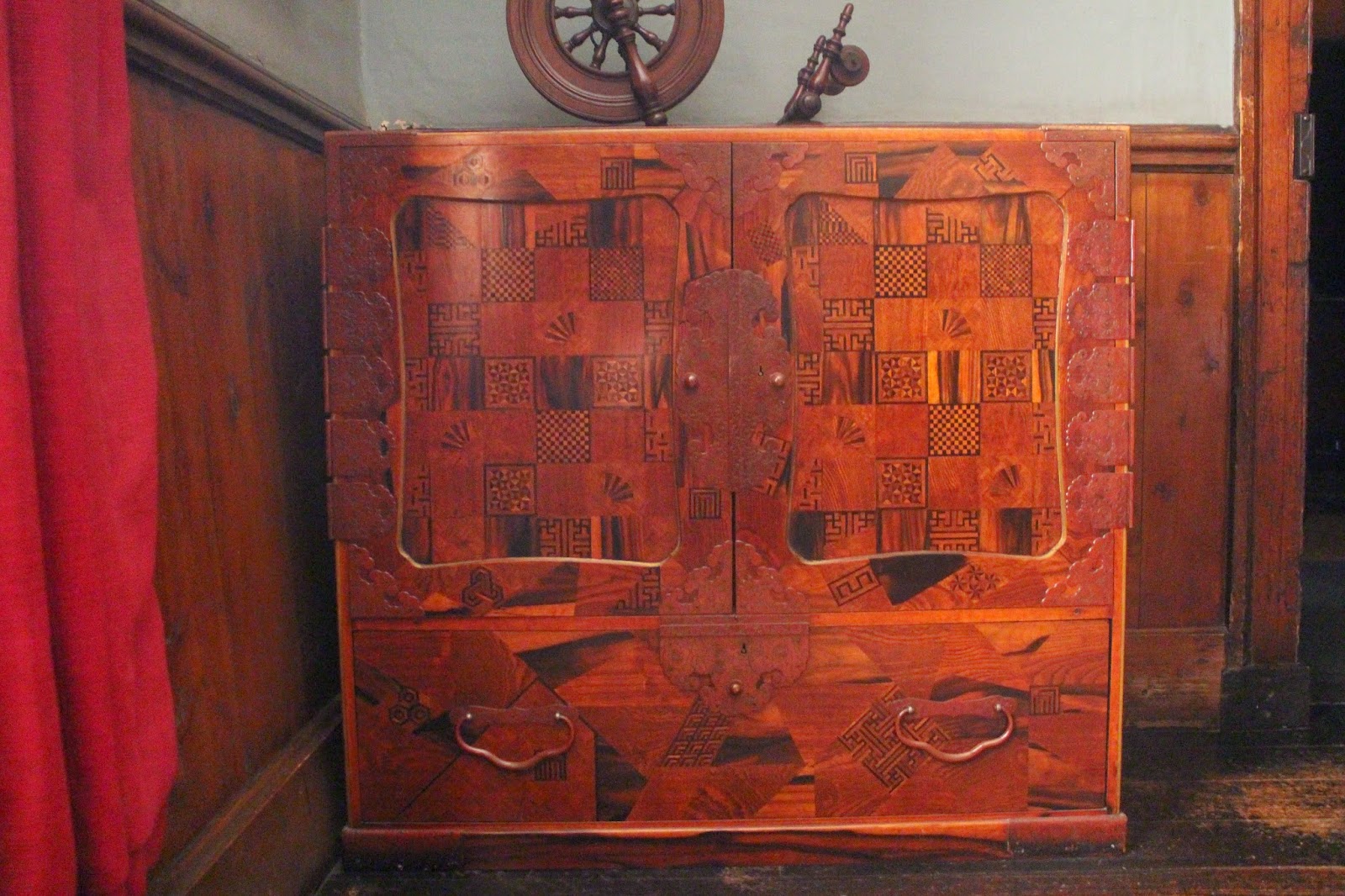 I have to be truthful and say that I wasn't exactly sure before I began researching it, I've heard a lot of conflicting stories of what it is but officially we have it down as a Japanese Tansu.
Made near Tokyo in the 1920's it is covered in a rich parquetry of irregular geometric shapes.

From a spot of research a 'Tansu' is a traditional mobile storage cabinet. This would certainly explain the handles on either side. It certainly is a lovely thing, and what I think it especially lovely is that the lock has been put on upside down. I hope Beatrix felt the same way as me and enjoyed this little quirk. 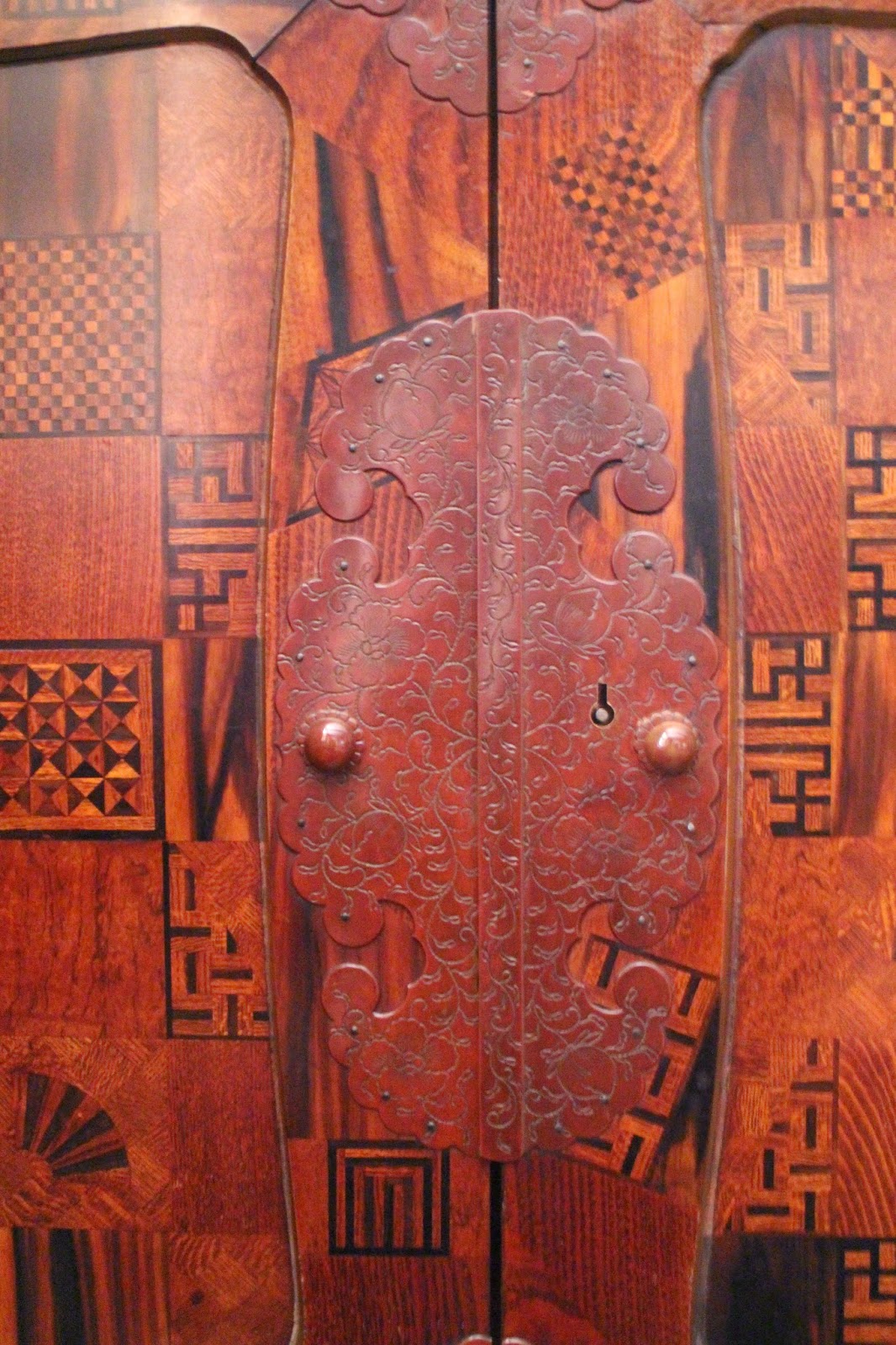 So, you think it's beautiful on the outside? Check out the inside! Many cabinets are gorgeous on the outside but the inside, rarely seen, doesn't get the same kind of treatment, well not this one. All the drawers have been treated with the same respect and have been parqueted. 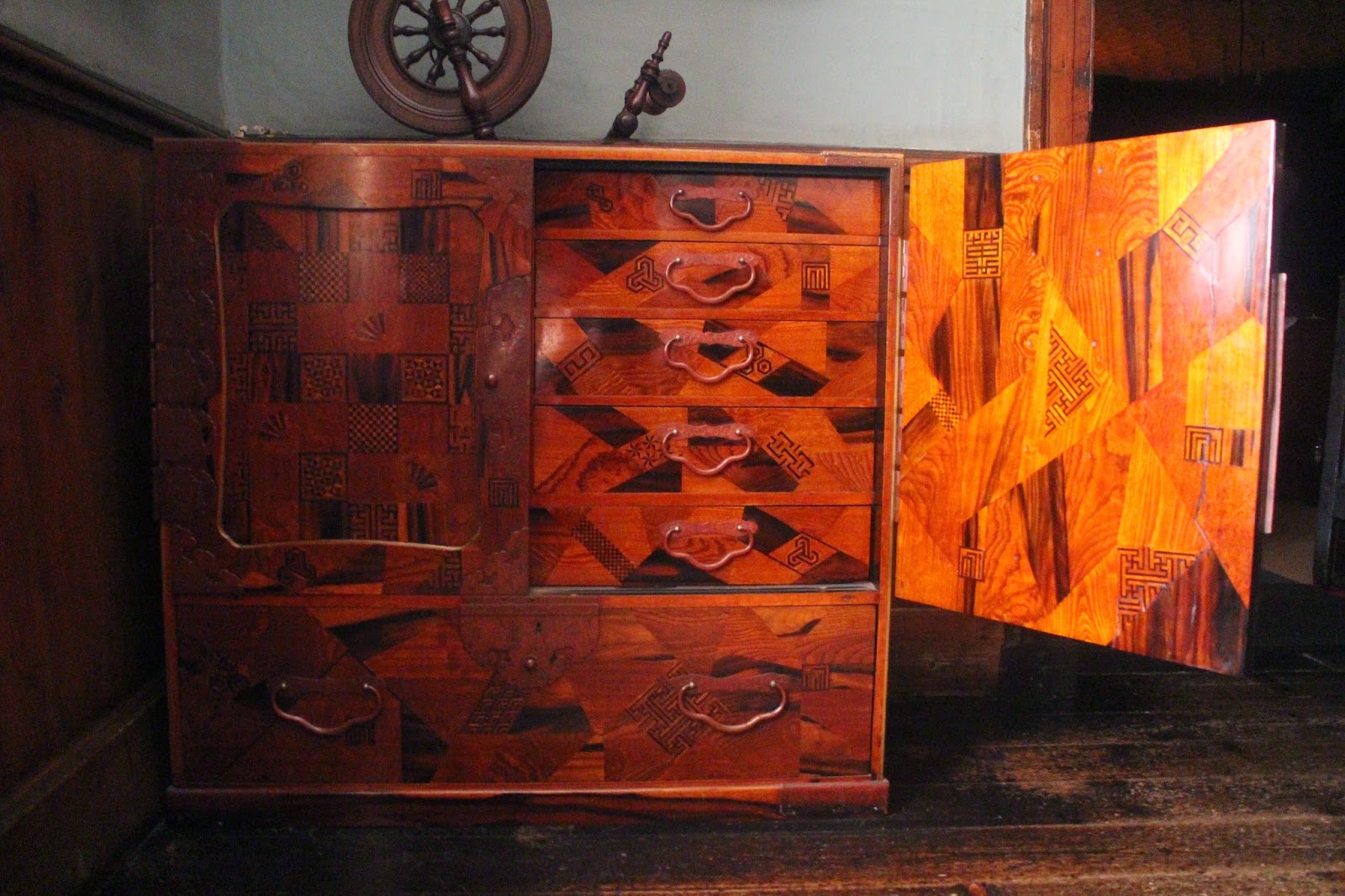 ﻿
It sits in the front Parlour and due to space restrictions it's secret insides rarely get seen so I'm excited to show this one to you all :)

I haven't forgotten about my new weekly feature, I'm going to call it 'Hello there!'

Just look at this serene face, I particularly love his little rosy pursed lips and round cheeks. 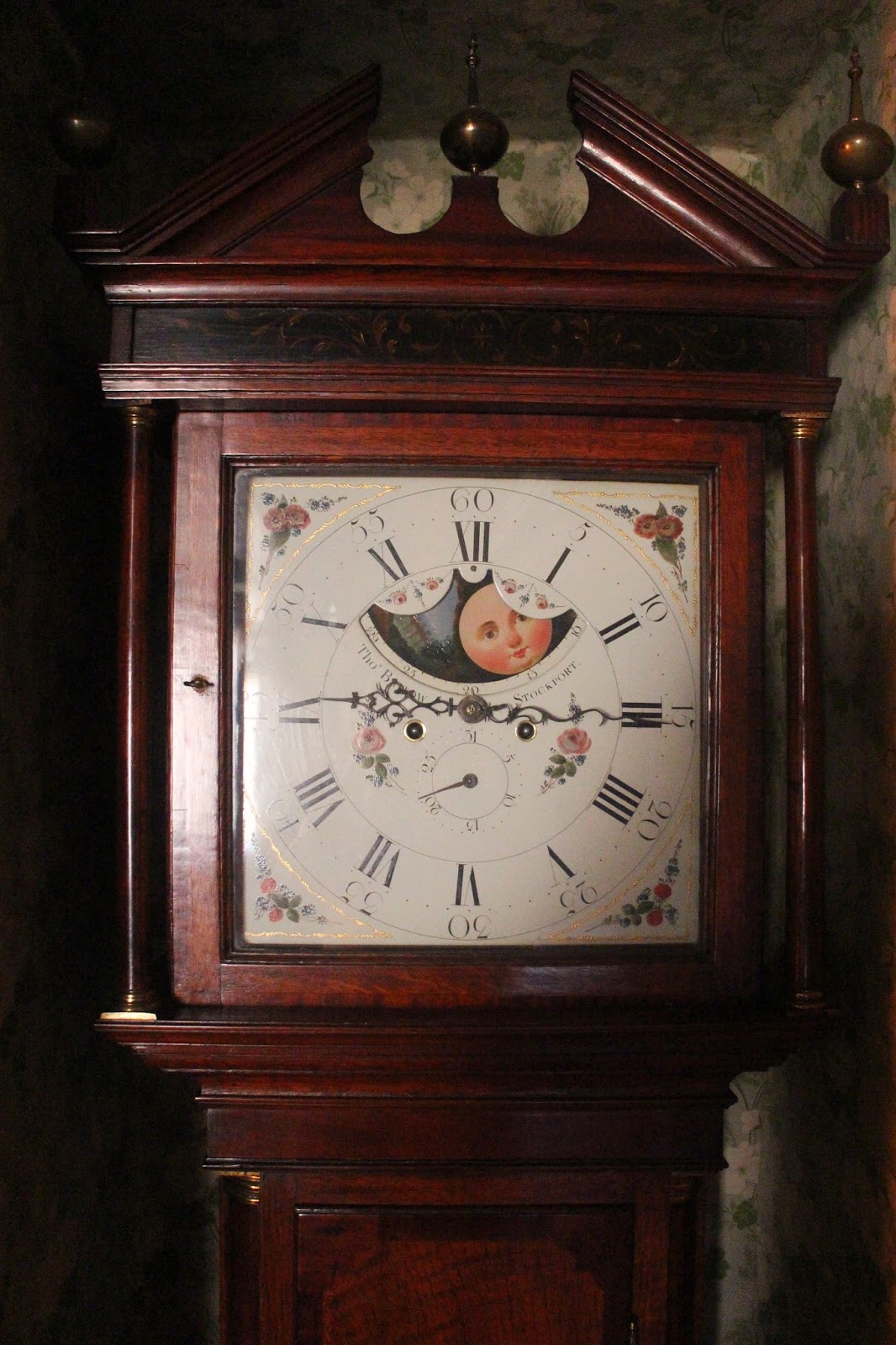 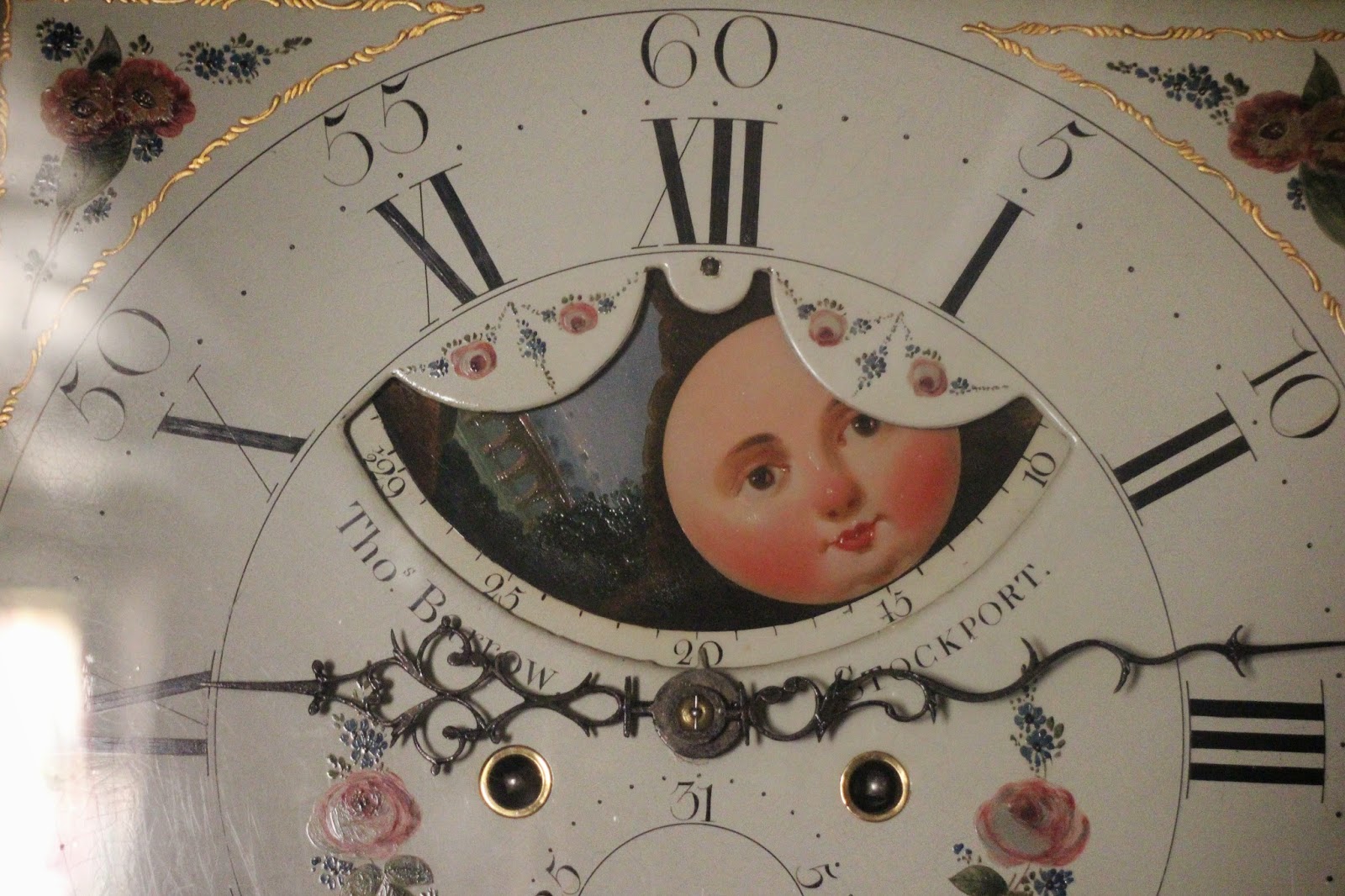 This long case clock was made in the mid 18th Century, between 1730 and 1770 and sits proudly in Beatrix's kitchen in a little alcove that looks as though it was made for it. Fans of her books will recognise this clock from her books, The Tale of Gloucester and Cecily Parsley. 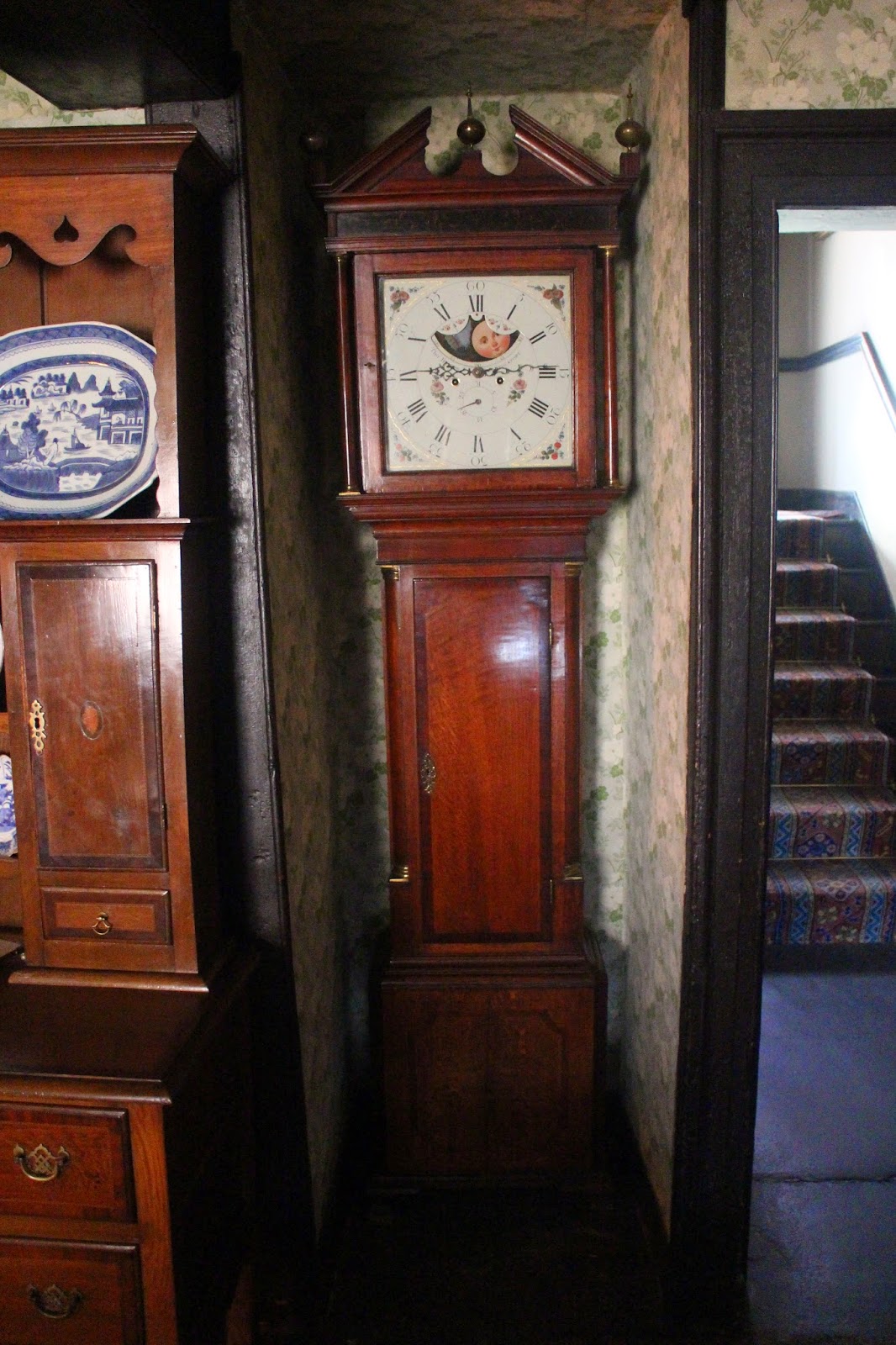 I believe that this aperture above the centre of the clock shows us the phases that the moon goes through, so that must make him the moon? Or perhaps the man in the moon? I'm not 100% sure but I do know that I like it.. I mean, him :)

This petite castellated turret is a late addition to this week's post.
To be honest I've never taken much notice of it before but as happened previously I was in the New Room on a quiet afternoon and I began to notice it. 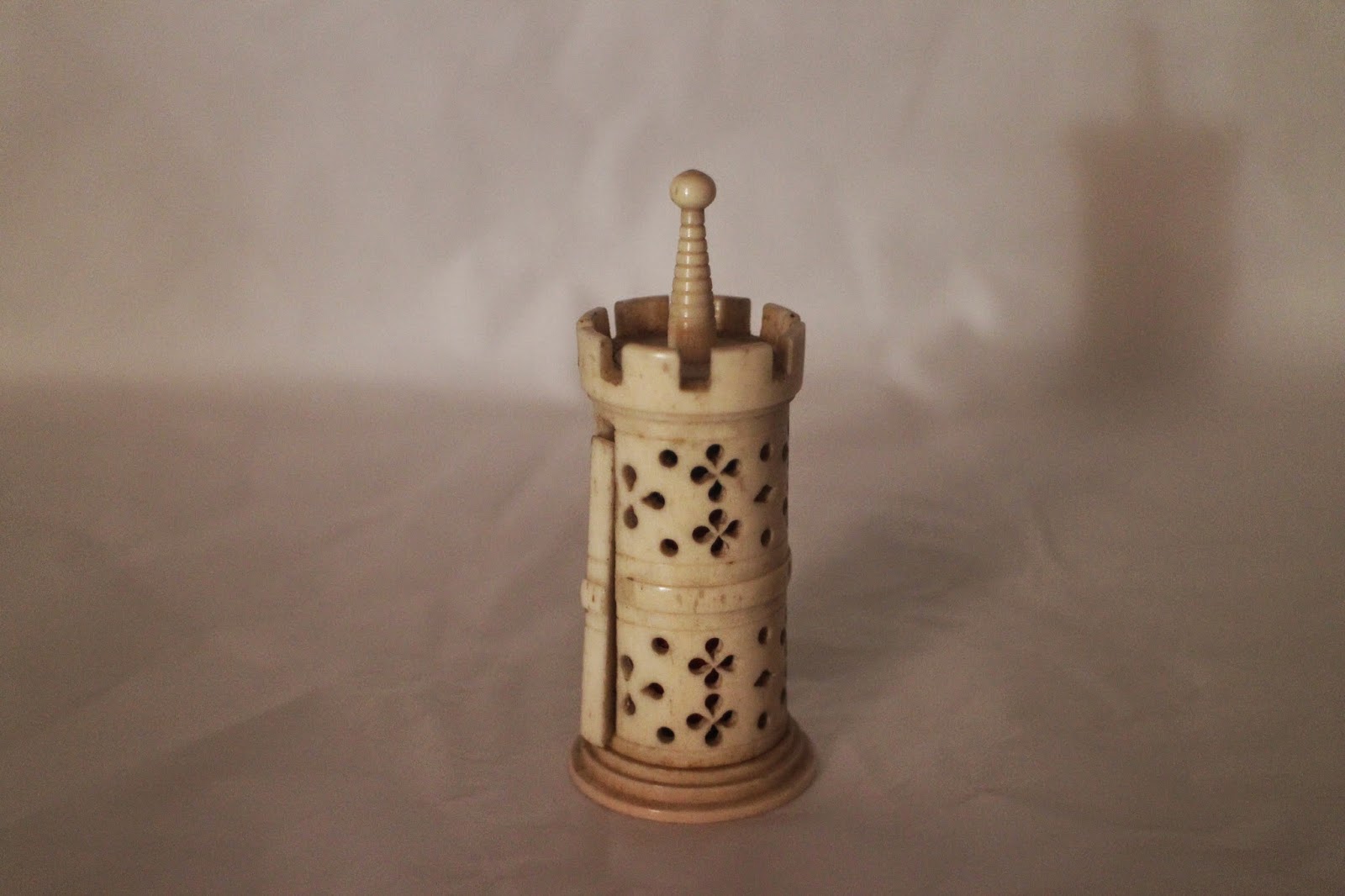 I didn't know what it was at the time but after a little investigation I discovered that this lovely thing is a needle case. There is a red ribbon inside with the needles on, this unwinds and you can pull it out from the loose section and to rewind it again you simply turn the 'pointy part' that is stuck on the top like an aerial in a clockwise motion.

That's your lot for this week. I really hope that you've enjoyed hearing my little story and reading about my choice of objects for this week.

I'd love to hear about the objects that you hold dear and the stories that are behind them! You can post them in the comments section below :)