Over the years of working here, you notice a lot of odd things, and you wonder about them, some of these things can most easily be solved by knocking a hole in a wall, or ripping something out, but this isn’t always possible, so I’m going to take you through all the things I have found and wondered about!


The box shape in the photograph of the Smoking Room looks very similar to how sinks look where left in the castle, we only have two left, but see the photograph of the housekeeper’s sink- are you convinced? Obviously there is a very strong possibility when the boards and cables were put in that the sink was ripped out too, but maybe, just maybe, there is a sink underneath this board that is hiding and waiting for us to let it out!

A step up into the Housekeeper's room. 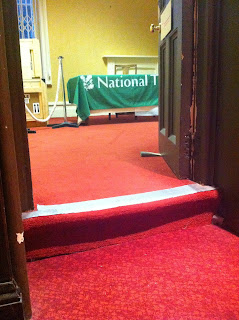 We aren't sure why there is a step up into the Housekeeper's room, it's the only room in the castle that has a step up into it. There has been a lot of speculation as to why this would have been- perhaps denoting her status but most likely and most convincing is that due to a basement corridor running underneath this room the Housekeeper's room was raised to give adequate head room below. This brings about questions about why the floor of the basement wasn't lowered instead, perhaps a large rock stopped this from being possible? The corridor would only have been used by servants, would a whole room would have been made higher just for an extra few inches extra head height for servants? What do you think?

A window in the maidservant’s apartments.

This is convincing from this side, see the rolls in a frame shape? If you tap the wall inside the frame shape, it sounds hollow and it is just a bit of plaster board. However, when you go outside there is no evidence of there having ever been a window there, see the photograph below, it's a bit hard to see, but I have circled where there should be a window. The stones on the exterior of the castle overlap and are as the rest of the wall, there are no cut stones or frame at all. 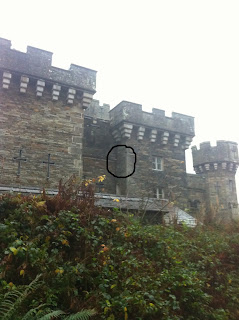 The bell & how it was rung.

We have a clock tower and a bell tower at Wray Castle, our clock was serviced and new mechanisms put in so that the clock could start telling us the time again. We think we have the original clock mechanism and it is on display as part of our Lost & Found Exhibition. But the bell tower is still a bit of a mystery for us. There is no bell left, just the hammer to ring it, and how the bell was rung is a complete mystery! We believe there must have been some access point lower down, which would have had ropes to pull, but we just can’t figure out where. We recently had an ex-Merchant Navy Student in, who told of ropes hanging down, we scoured the servant’s area for possible places, but we didn't really come up with anything. We hope to find some evidence one day!

Discovered last year out of season, was a trapdoor. It’s in a very small room between two rooms that would have been formal bedrooms. It is believed that at least one of the two bedrooms would have been where Beatrix Potter would have slept when she was here, as they are formal bedrooms, but quite private in comparison to the ones that surround the Lantern/Central Hall. We really don’t know why the trapdoor is there, or when it would have been put in! 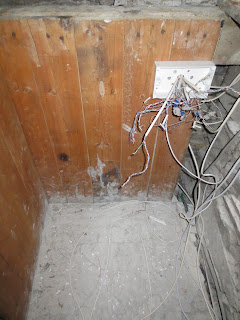 Two cars and a motorbike inside a wall!

This is a mystery that has most plagued me, as it was one of the first mysteries I heard of and at that point it was just one car. I have had contact from one of the owners of the cars supposedly put inside the wall, whom told me there were in fact two cars and a motorbike. They are now classic cars, as they were put in the walls during the sixties, and apparently one of the cars was still running as blocked up. The wall in question is in an area changed from a courtyard into a room, as part of an extension on the kitchen- the extension was done by the Merchant Navy, and the cars inside the walls seemed to be in retaliation for the National Trust having told them they had too many cars on site!
Unfortunately, as the extension was altered during the 1990s, again by the Merchant Navy, I fear that the cars would have been taken out then, either for scrap, or to use if they did still run- that is if they were ever there in the first place! I still hope to see inside the space I believe them to be, at least to see some vague sign of this being true, an oil patch on the ground, an old registration plate.

But the real question is- are these things better as mysteries? Would it just be disappointing to find no sink, to find no window, no cars, no bike? Or to find the trapdoor was simply storage and that there is definitively no trace of the bell ropes? Is it better to imagine that they’re there, behind the walls, under the boards- there could be anything!
Posted by NT South Lakes Houses Team at 09:47
Email ThisBlogThis!Share to TwitterShare to FacebookShare to Pinterest
Newer Post Older Post Home