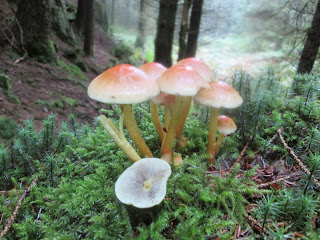 Every year I fall in love with autumn.  Trees and bracken cast off their summer uniform of green and more green and have a fling in yellow, brown and red.  Branches emerge to wave witchy fingers against the sky whilst, on the ground, toadstools appear to test our skills at identification.

We christened this one, found at Wray Castle, the 'Hot Cross Bun' fungus!

I could envy Beatrix Potter many talents but in autumn I wish I had her ability to paint fungi.  Not only did she make detailed botanical illustrations but she also conducted some pioneering research into their life cycles.  Her 'partner in crime' was a retired postman, Charles McIntosh, 'the Perthshire naturalist' who she met on holiday in Scotland when she was 26 and kept up a correspondence with.  At the time, scientists were mainly concerned with the micro fungi responsible for fermentation and diseases such as mildew so it was left to Beatrix to investigate the larger specimens.  This she did to much critical acclaim and it is something of a mystery why her paper on the subject was never published by the Royal Society.  The Armitt museum in Ambleside has a fascinating exhibition detailing Beatrix's life as a scientist, as well as other aspects of her life.


Back home, he sent this Puffball/Earthball rolling down the hill near Claife Viewing Station.  He was disappointed it wasn't Hisball!