They didn't do Latin at my school. I grew up in the industrial North-East and I guess there wasn't much call for it at British Steel or ICI. In any case, given the speed with which I dropped French I probably would have struggled with it. If I had been able to study Latin though, it would have come in very useful indeed in what I eventually chose as my career.

All living things; animals, plants, fungi and algae all have what is called a binomial or Latin name which consists of a genus and a species eg Homo sapiens (that's you and me), Rana temporaria (the common frog), Erinaceus europaeus (the hedgehog), Digitalis purpurea (foxglove), Balaenoptera musculus (blue whale) well, you get the idea.

The purpose of this binomial is to make it easy for scientists around the world to talk to each other without getting confused over common names and different languages (it also has the added bonus of making zoologists, botanists and certainly gardeners appear more intelligent than they really are). For example, in England what we call the bluebell is Hyacinthoides non-scripta, but in Scotland they call Campanula rotundifolia the bluebell which in England we call the Harebell, and in America and Australia the bluebell is something different again. Confused yet?
﻿

The other ﻿great thing about Latin names is that they often tell us a bit about the plant in question and its relations. For instance from the name Primula pulverulenta I know that the plant belongs to the primula genus which includes all primroses and that its leaves are coated with a creamy-white flour (technically known as farina), because pulverulentus means dusty in Latin.

Which brings me on to my 'Plant of the Month' the Wisteria. At Hill Top we have two of them, a white one on the house and a mauve-blue one on the gardener's shed and they are both coming into flower right now. Both of them are Wisteria sinensis but the white one is Wisteria sinensis 'Alba' (alba meaning white in Latin). The Wisteria part of the name tell us that it is in the same family as the other common wisteria, Wisteria floribunda (floribunda means free-flowering in Latin), and the sinensis bit means it comes from China (sinensis meaning Chinese).


﻿﻿﻿﻿
The wisterias at Hill Top are more or less left to their own devices apart from cutting back the long growths in August and late winter and they thrive on our sunny (?) south-facing walls.

If you haven't got a suitable wall you can have complete control of your wisteria by growing it as a free-standing little tree in a pot. it's a labour of love but the results can be impressive (check out the internet for instructions), or cheat and buy one ready trained!

If your wisteria refuses to flower, there can be a number of reasons-
- not enough sunshine
-lack of feed (use a high potash fertilizer)
-incorrect pruning
-a non-grafted plant (might take thirty years to flower)
-not enough water
-too much water

If all else fails dig it out and go to the garden centre in May and buy one you can see flowering!

Oh, and my blog title this month? Peter Rabbit in Latin of course! 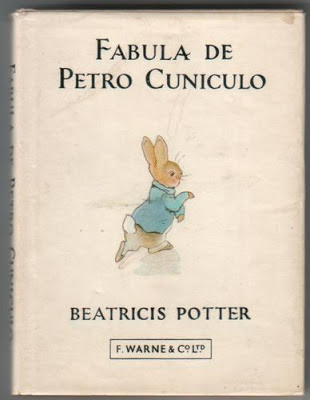