Oscar-winning actress and author Emma Thompson has insisted that it was the way that the publisher  approached her to write a new Peter Rabbit book that made it impossible for her to say  'no'.


Appearing on The One Show this week, she said they sent her a box in which was a small blue jacket, remains of an eaten radish and a note from Peter Rabbit himself asking her to write him a new story! Who could resist?!
﻿
﻿Above is the moment Emma revealed the jacket (which got a big 'aahh' from the studio audience). If you want to hear Emma talking about this and reading an extract from the book, you can...

You can of course buy Emma's new Peter Rabbit book from Hill Top shop (and get one of our Hill Top book plates put in it to make it even more special).﻿ ﻿
﻿
﻿You might be interested to know that this is not the first letter sent from a Beatrix Potter character. In her lifetime Beatrix herself wrote to children direct from her characters, sometimes with them explaining that Miss Potter was busy, and so could not write herself.

They are part of a delightful series of miniature letters written to children by some of her famous characters. These letters were written on very small pieces of paper, folded even smaller and some put into small mailbags or red post boxes that Beatrix made herself, before being despatched to her young friends.

To celebrate Peter's 110th anniversary Warnes published a wonderful little book of these miniature letters, it is available from Hill Top shop.

Finally, back in March on our blog we mentioned that we had hosted a group of journalists visiting Hill Top. They had been guests at an event hosted by the publishers Penguin/Warnes, which several of our own team attended, and during which they were treated to a preview of the book by Emma herself. Below is Emma in full flow back in March (when details of the book were still hush-hush). 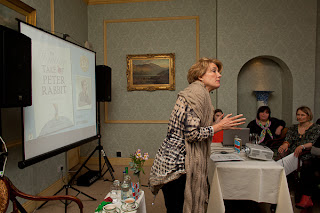 If you'd like to buy either of the books, you can at Hill Top shop; and if you can't get to Hill Top in person you can buy by mail. Phone Hill Top Shop on 015394 36269; or e-mail hilltop.shop@nationaltrust.org.uk.